Tragi-camp performance lecture that takes the gestures that opera singers make on stage and turns them into a powerful sequence of dances.

I took notes for this show. Not notes for the review, but notes of all the things I was learning, because this is a performance lecture, based on a PhD thesis. If that makes it sound dry or boring, then you could not be more wrong, because Admiring La Stupenda is funny, dramatic and warmly presented.

Its subject is the gestures of Opera singers, and it takes those gestures and translates them into dance.

To do this, it not only focuses on one singer, Joan Sutherland, it also relates her to her most ardent fan, the Opera Queen. A dying breed, the Opera Queen, would use an exhaustive knowledge of opera, obsessive collecting, and the fastidious cataloguing of their collection to protect their feelings from a world that often aggressively marginalised them. 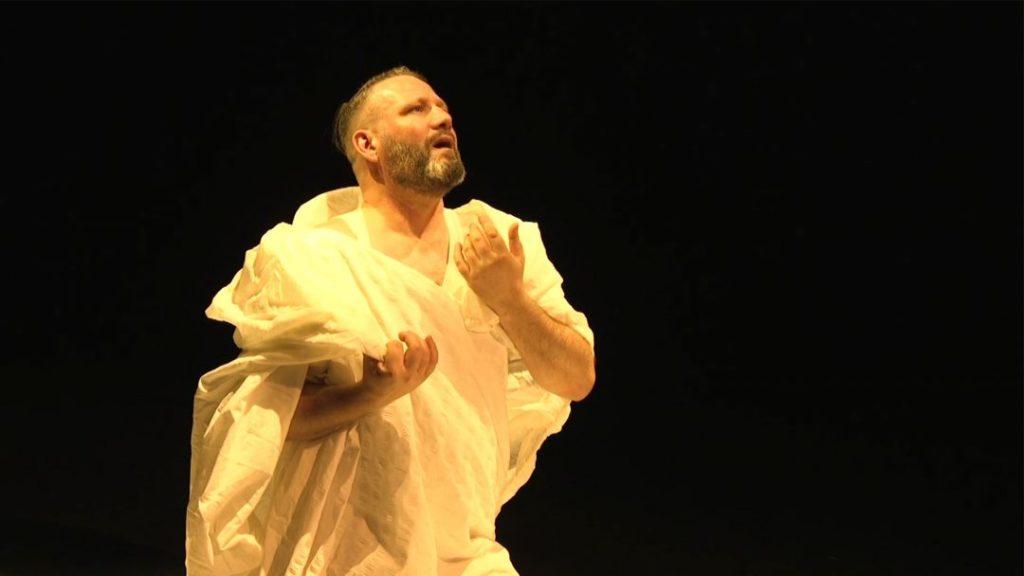 Also a fan, Daniel Somerville, recreates a bedsit out of sheets on the floor, and then, brilliantly, uses the sheets to make Sutherland’s outfits. He then dances her most famous performance, the mad scene from Donizetti’s Lucia Di Lammermoor. Meticulously accurate, this is also ridiculous. The essence of camp has always been something low, aiming to be something high, while seemingly entirely unaware that it’s failed. With opera we contrive to pretend that its sophisticated music means there is nothing at all laughable about a larger lady wafting around a stage covered in fake blood, eyes wide, convinced she’s about to marry a man she murdered.

From this strong, clear start, the thesis loses its way. I’m not entirely sure where he’s going when he starts to talk about his mother and anxiety, or how that ties in with fandom and his love of Joan Sutherland. We’re in darker territory, the dances become sad, and frighteningly grotesque. We’re going deeper than camp, deeper than the rules that we use to order our thoughts, and down into the seething, yearning, pools of feeling that most of us fear to drown in. It’s a powerful ending, and I left thinking about voices that are rich, dark and agile, and dancers who will rolls and flap around a stage in total silence, and the way bubble machines can make an ordinary space magical.

Technical and Stage Manager: Geraldine Gibbons
Supported By: The University of Worcester
Created and Performed By: Daniel Somerville

Admiring La Stupenda will be continuing its run at Greenside at Nicolson Square till 17th August at 15:00. You can book your tickets from www.edfringe.com