Review of: The Secret Diary of Adrian Mole the Musical

An exuberant, heartwarming musical about growing up that will have you laughing and crying in equal measure.

What a life-affirming, toe-tapping, heart-rending, spine-tingling celebration of a musical this is! From the opening scene (New Year’s Eve 1981, of course) to the closing one (New Year’s Eve 1983) this theatrical adaptation of Sue Townsend’s much loved novel, The Secret Diary of Adrian Mole the Musical doesn’t miss a beat. The music and book, written by the musical theatre duo Jake Brunger and Pippa Cleary is first-class, capturing all of the comedy and humanity of the novel and injecting their own brilliance. It is as though their music is a highlighter pen in the original text, enhancing the humour and pathos. 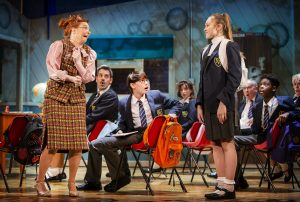 Lara Denning as Miss Elf, Rufus Kampa as Adrian and Rebecca Nardin as Pandora in The Secret Diary of Adrian Mole at the Ambassadors Theatre

Under the direction of Luke Sheppard, the cast of four children and six adults form an impeccably tight ensemble, with the adults taking child roles when needed to great hilarity. The night I was there Rufus Kampa, making his professional West End stage debut as Adrian was just captivating. He held the show effortlessly and perfectly captured the intensity of Adrian’s emotion; his torments, though funny are completely believable.

And this is where the show really succeeds: in among all the humour there is time taken to explore the real emotions of the piece. Amy Ellen Richardson, as Pauline Mole and Andrew Langtree as George Mole have wonderfully heartfelt songs as their marriage falls apart. And a particularly strong duet between George Mole and Adrian is mirrored by one between Pauline Mole and Grandma Mole, played with great gusto by Rosemary Ashe. These sung emotional outbursts are thrilling to watch and prevent the piece becoming a parody.

Swotty, horsey Pandora, played on the night I was there with great accomplishment by Rebecca Nardin is also a strong presence in the piece along with love-rival Nigel (played with cocky coolness by Jeremiah Waysome) and nemesis Barry (played with confidence and sensitivity by Jack Gale making his stage debut). While the majority of the laughs are directed at the exquisite comedy characters created by Lara Denning as Miss Elf and Doreen Slater, and John Hopkins as a sleazy Mr Lucas and demonic Mr Scruton.

Tom Rogers design is a delight for the young audience with beds sliding into cupboards and a kitchen swiftly transforming into a classroom and back again. And it is wonderful when the live orchestra is revealed in the second half.

Due to themes of a sexual nature the age guidance for the show is 8 and above, but young teens will adore it.

The Secret Diary of Adrian Mole runs until 12 October 2019 https://adrianmolethemusical.com