David Farley designs Sets and Costumes for Theatre, Opera and Live Events and is Associate Designer for Slung Low. Here he shines a light on what it’s actually like to be a professional theatre designer, from concept to curtain up. 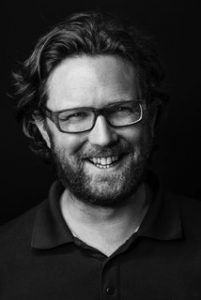 I love what I do. I’ve always loved drawing and making things and helping people, I also loved the kind of people who were drawn to the drama studio in my school. I was very lucky to see a small touring exhibition of graduate theatre designers around the time I was choosing my GCSEs and realized that not only could I go and do a degree in the subject but there was a potential career at the end.

Each show is different, with its own unique challenges, in (usually) a different space, maybe a different country. You have to look at what you are doing afresh each time.

Most of the time I’m starting with a script, a piece of text. I’m dyslexic, so the reading and re-reading is always a slog for me, but over the years I’ve developed different coping mechanisms which help.

Sometimes (not very often) you have a big budget and can just go for it, other times you have to make tough choices on just where you want the tight budget to be spent, and deciding where it will be used most effectively to create the impact you want in liaison with the production manager who manages this money on behalf of the company. 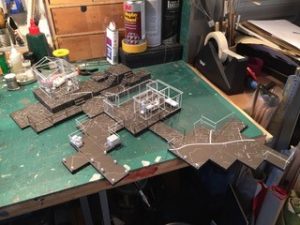 One of David’s model boxes

As a freelance designer, I sit in my studio model making a detailed 1:25 scale version of the world I imagine the show inhabiting (I really love this part of the process), remembering all the abstract conversations I’ve had with the director and feeding these into this three dimensional ‘bible’ of my design. I want to be able to say to the Production Manager and the workshops ‘give me this 25 bigger and I’ll be happy’ so as a designer I need to make every detail and texture as accurate as possible. The model can become mesmerizingly beautiful as a consequence but it is primarily a working tool, a reference point that allows me to show the director/producer/production manager exactly how the physical world of the show is going to work.

These models can eat time and money and when you’re up against a tight deadline you may need to bring in an assistant or two to help pull it off, or someone with a specific skill set, usually dipping into your fee to cover the costs.

In further meetings with the director prior to the start of rehearsals,  we’ll move elements about until we get it just right (letting the director get stuck in, trying to limit the inevitable damage they will cause… ‘it’s fine I’ll glue it back together later’). Next we will meet with the lighting designer, exploring the angles for light that work best for the design and seeing how the colours in the set may react under coloured light.

My role as a designer now shifts to spending time away from my studio overseeing the building and finishing of the set with set builders, scenic artists and stage managers all referring to the model. Together we look at materials, paint and texture samples, exploring different techniques that could be used to get the right effect.

I implore the workshop to look after the model and to have it back to me ready for first day of rehearsals for the big presentation in front of the full company and often most of the staff of the venue as well as the actors. This is my least favourite part of the process – there’s a very good reason why I had no interest in being an actor and chose to do anything backstage instead of being up there in front of an audience.

Once rehearsals start, my direct points of liaison are primarily with the stage management team who mark out a real size ground plan of my design on the rehearsal room floor using my technical drawings and deal with gathering all of the props for the show based on the references I have provided. 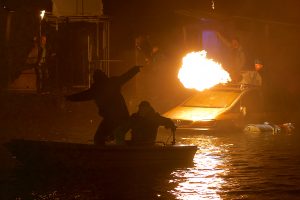 In the final week or so before the show previews then opens, we move into the actual fit-up of the set in the theatre which brings everyone involved in the production together in the same space. At the moment when the set starts coming out of the truck I have a little panic ‘did I use the right scale on the drawings?’ (yes, every time! ). Of course, I did and it all starts to come together.

The lights start to be focused and cues plotted, the wizard lighting designer does their thing and we are finally there in another world, peering in. The set design is brought alive with the brilliant actors looking amazing in those costumes. Don’t ask how many hours that beading took as the costume designer looks up blurry- eyed from that garment they are doing last minute alterations to!

And eventually the final collaborators arrive on opening night- the audience -ready to suspend their disbelief and be swept away by this story in a magical world which has been so lovingly crafted for them.

Now I’m on the train home, going through my receipts making sure I’m claiming all the expenses the producer agreed I could be reimbursed for. And I do a back of an envelope calculation for how many days I ended up working on this show and what that would make my day rate (not even starting to think about my overheads of my studio, the licenses for the computer software etc).

The Value of Design

It’s an amazing  job and I love what I do. The Society of British Theatre Designers Value of Design campaign in partnership with the Association of Lighting Designers, Equity and Bectu and having my work represented in Staging Places: UK Design for Performance 2015 – 19, their exhibition at the V&A means that the year ahead will be an extraordinary time for the complexities of what we do as designers to be appreciated.