Review of: Amelie the Musical

The iconic film is transplanted onto the stage

As the guy in the room who did one of his French A-Level exams on the filmography of Jean-Pierre Jeunet, the prospect of seeing Amélie on stage in musical form is a daunting one. The expectations are high. To some extent, any stage production will never live up to the incredible aesthetic the film creates, largely thanks to cinematographer Bruno Delbonnel, who manages to blend complimentary reds and greens with almost stupendous abandon (here is another great one). The film can sometimes look like The Matrix with extra make-up. It’s a masterpiece of cinema.

But how does director Michael Fentiman’s new staging of the musical fare? Especially after the piece’s rather shaky initial debut run with Philippa Soo (and, initially, Samantha Barks) in the lead role, which closed after two months on Broadway to a collective shrug. Not only is the show’s UK premiere therefore saddled with having a hugely successful cult film to live up to, but also a rather insubstantial initial premiere. As a result – the necessary legwork needed by Fentiman, designer Madeleine Girling and musical supervisor and arranger Barnaby Race is relatively bulky. 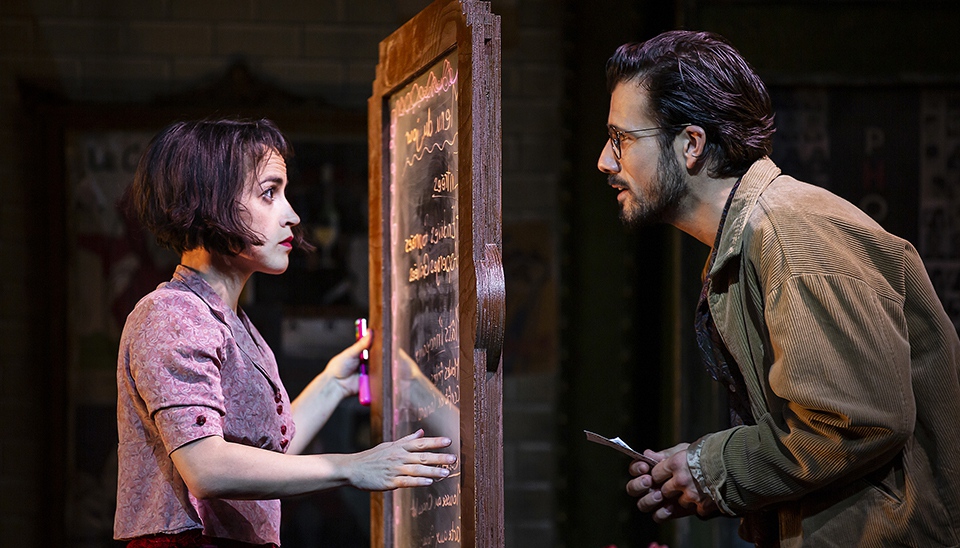 Girling’s design never really tries to do more than faintly echo Delbonnel’s colour palette, instead tapping into a charmingly tweedy ‘90s aesthetic, full of woolly warmth. Faint traces of the red/green are present but never overbearing, instead letting tall, winding metal columns of the set loom over the action.

But it’s Race’s work that needs a good heap of examination. As per many Watermill productions, this is an actor-musician version of the show, with the cast flooding the stage and creating a rich, woody sound, leaning more heavily on the strings compared with the initial Broadway orchestration (you can hear that on Spotify). The show has moved the piece’s central number “Times Are Hard For Dreamers”, from the start of act one to the middle of act two (now meaning the number’s reprise actually comes before the actual number), adding a flood of energy to act two that sees a rush of euphoria heading into the show’s cockle-sizzling climax.

It’s Fentiman’s final couple of scenes, as Amélie and potential heartthrob Nino stand opposite each other in complete silence, that proves just how deft the production is – confident enough to simply stop all the music, flare, ensemble numbers to place the spotlight on a tiny set of actions conducted by two people afraid to admit how much they love each other. A marvel and an unmissable touring show.