Marking Complicité’s return to the Fringe after more than twenty years, and the first time they have made theatre for primary school aged children, I’ll Take You to Mrs Cole! is a fun and frenetic show for children and grownups alike. Writer, director and long-term Complicité collaborator Catherine Alexander and Executive Director Polly Gifford tells us why they wanted to bring this beloved children’s book to the stage… 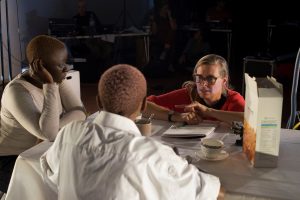 Can you tell us a bit about I’ll Take You to Mrs Cole?

CA: I’ll Take You to Mrs Cole! is based on the book by Nigel Gray and Michael Foreman. I have set the story in Coventry in 1981 when Britain was facing the worst recession since the 1930s. The story is about a single mother from Barbados and her imaginative child Ashley. On one fateful day, Ashley’s play gets a bit too wild and Mum uses the potent threat of Mrs Cole, a chaotic neighbour with a dirty house and lots of kids. Ashley is terrified of her but ends up being magnetically drawn to her door. This is a story about the challenges (and joys) of parenting and the transcendent power of children’s ability to imagine and play. Ashley is a lively, fun and curious child who is absorbing the world around them and making sense of it through imaginative play. The fear of others who are different to ourselves plays large in every community but the curiosity and fun of a child can bypass difference and find a humanity in common. The show is set in a year of rising unemployment and racism and in a place where Two Tone music was a direct challenge to divisive agendas. I grew up on the Two Tone sound and love reggae, ska and the music of iconic artists like Ian Dury, Elvis Costello, Steel Pulse, The Beat and The Specials. This show will have the energy of a gig with lots of original songs, combined with visual story-telling and exquisite original stop motion animation by Amber Cooper Davies integrated into a video design by Hayley Egan. It is a very funny and anarchic show for children with a real grounding the realities of life.

This is the first time Complicité have returned to the Fringe in 20 years. What have you been up to in that time, and are you looking forward to being back?

PG: Complicité was last in Edinburgh with The Encounter directed and performed by Simon McBurney at the International Festival in 2015. We won the Herald Angel award that year. But it’s been far longer since we had a show at the Fringe. In 1985 we took More Bigger Snacks Now to the Fringe Festival and won what was then called the Perrier Award for comedy. We were the first theatre production to win the award. We can’t wait to see what happens this year! In between, we’ve been touring the globe with a raft of productions and have won over 50 major awards. The Company has become synonymous with the most imaginative and innovative storytelling, all of which will come into play with I’ll Take You to Mrs Cole and it really exciting to bring the Company’s work to a whole new audience.

This is also your first show for primary aged children. What’s it been like creating the show?

PG: There has always been a playful quality about Complicité’s work and in a show for younger children and families, the creative team have really been able to let this run riot, which has been great fun. It has been a challenge to approach this show with the same production values as our larger scale work. The economics of mid-scale touring are very difficult in the UK, particularly for work for younger audiences. But there is no one better than Catherine Alexander, and the fantastic creative team, to come up with creative solutions. Catherine is a long time collaborator and Associate – she has worked with us for over 25 years and embodies the values of Complicité. She trained at Leqoc (like the founding members of Complicité) and also established and runs the BA hons Collaborative Devised Theatre at the Central School of Speech and Drama – which has produced a wealth of talent.

The show is based on a children’s book by Nigel Gray and Michael Foreman. What drew you to the story? 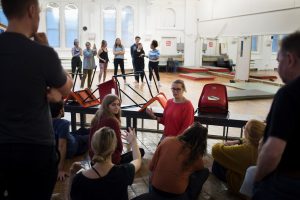 CA: In 2016 Complicité asked me if I had any projects brewing and I suggested creating a show for families with young children. One wet winter Sunday morning in Archway a friend was feeding us cinnamon rolls and he put a colourful picture book into my hands. It had been his favourite book growing up but not one that I’d come across before. I read it to my son and we immediately fell in love with it. Written in the early 1980s it was a parallel to my own childhood and felt strangely familiar in many ways. The visual and written language of the book is incredibly rich with lots of clues scattered about the two families in the story. The story is also delightfully grotesque and scary with Ashley imagining that Mrs Cole makes stew out of children and keeps piranhas as pets. The written language is a delight to adapt from as it is rhythmic and colourful and very, very funny. It is unusual, especially in the 1980s, for a book to feature single parent families and it also has a black protagonist. This got me thinking about what is was like for a child exactly the same age as me who grew up in an urban centre and with an immigrant parent. I grew up in a pretty mono-cultural rural town and although I share many of the same concerns as Ashley my experience is radically different. I found it really interesting to try and look at the world through Ashley’s eyes and with the incredible insights of the actors and creatives I have been working with we have tried to create a full and rich sense of Ashley and his Mum.

Can you tell us a bit more about Complicité Associates?

PG: Complicité Associates are those extraordinarily talented artists and theatre makers who have travelled with Simon McBurney and the Company on a journey of theatrical experimentation spanning more than thirty-five years. They are the members of our extended family, contributing hugely to the Company’s aesthetic as well as to the unique process by which we develop ideas and make theatre. They are an ongoing source of inspiration. The ‘Complicité Associates’ strand of work offers these individuals a potential partnership with the Company to research, develop or to fully realise intriguing theatrical ideas, supported by the Company’s networks, knowledge and production resources. In turn, Associates are encouraged to become involved with the projects of Complicité’s newer partners, for example, providing advice and mentorship to the artists involved in other strands of the Company’s activity.

The show centres on a single mother and her child. What would like you other single parents to take away from the show?

CA: As a happy single mum (until very recently) and a child of divorced parents, I wanted to make a show that celebrates solo parenting. A quarter of all families in the UK are single parent households and yet there is still very little representation in children’s books and theatre. When my son started writing stories they were solidly based around a nuclear family because that was all he read. I know many single parents who feel uncomfortable and isolated: that they never quite fit. Sometimes you feel that everybody else is in a couple. It can be challenging emotionally, physically and financially to parent alone and yet it is also so rewarding and completely brilliant. Inevitably, there is so much of my life with my eight year old wrapped up in this show: I wanted to capture the challenges, the closeness of the relationship a single parent has with their children as well as the great fun. In the end, Ashley is a fantastic, wonderful, funny, warm and happy child who can bring a wider community together through play. If we can create supportive communities our lives as parents are so much richer. I live in London, and before I had a child and didn’t do more than nod at neighbours on my estate. Now I have so many friends and an amazing support network that will step in and help with babysitting, share meals and stories and just hang out. I just hope that single parents have a good chuckle at the show and that it reinforces the normality of their family structure for their kids.