It’s been a good 20 years since I read Captain Corelli’s Mandolin, Louis de Berniere’s breakthrough novel, and so it was a delight to reencounter the story again with the full force of director Melly Still’s theatricality. Indeed, I had forgotten much of what makes up the first half of the show. A love story between an earnest young Italian solider Carlo (played by Ryan Donaldson) and his mouse-loving nervous friend Francesco (Fred Fergus) against the backdrop of a brutal war. 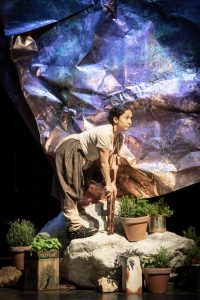 We are introduced to the island of Cephalonia by a goat, played with great commitment by Luisa Guerreiro and the learned Doctor Iannis (Joseph Long), who quotes at length from his own history of the island. We also meet his headstrong daughter Pelagia (Madison Clare) and the man who is determined to win her heart Mandras, played with great energy by Ashley Gayle. Their world is created by the characters that surround them; Eve Polycarpou, who plays Mandras’s long-suffering mother Drosoula, brings a real sense of place to the show, particularly in her wonderful singing. Kezrena James plays a wilful young child Lemoni and Elizabeth Mary Williams spends much of the show as Pelagia’s pet Pine Martin.

The adaptation by Rona Munro feels as though it could have been tighter, with the narrative lines pulled out more keenly. During the first hour we wade through a lot of history in a story that is at times difficult to follow (perhaps suffering from being overly faithful to the novel). It is only when the charismatic Captain Corelli (Alex Mugnaioni) arrives in the second half (well, just before the interval), that the show picks up. Madison Clare as Pelagia also seemed to find her stride after a somewhat subdued performance in the first half.

If you have ever been to Cephalonia you will know that, like all Greek islands, it is dominated by the colour blue. An uninterrupted brilliant blue sky and a dazzling blue sea, broken only by the green of the hillsides dotted with the yellow buttercups and red poppies. It seems a shame that none of this colour found its way into Mayo Trikerioti’s stark set. Instead, two giant crumpled sheets of metal hang against a black backdrop. It suits the war scenes, but we lose the sense that bad things can happen in beautiful places, which is at the heart of the book. Malcom Rippeth tries hard to rectify this with his lighting design, bringing warmth to the island scenes.

The physical ensemble work and the musical moments are what makes the piece strong, with resounding outbursts of Verdi by the Italian soldiers and heart-rending laments by Drosoula.