Review of: The Light in the Piazza

The Light in the Piazza is a charming musical heralding the start of summer at the Southbank Centre. Set in Florence in the 1950s the story follows an American mother Margaret, played by the incredible singer Renée Fleming, and her ingenue daughter Clara, played by Dove Cameron. Both women are making their West End debuts and seem to be loving every minute. 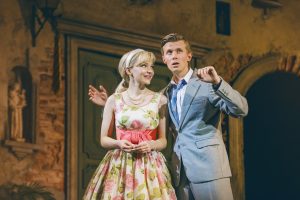 Dove Cameron and Rob Houchen in The Light in the Piazza at the Southbank Centre. Photo: Dewynters

The show starts with Margaret and Clara sightseeing in a sunny piazza. A retro vespa passes to reinforce the  the 1950s setting, which is largely created by the historical exactitude of Brigitte Reiffenstuel’s exquisite costumes. A gust of wind blows Clara’s hat off and it lands in the hands of a young Italian boy, Fabrizio, played with great earnestness by Rob Houchen. It is love at first sight for the pair. But the women must navigate the tight-knit Italian family, headed up by Alex Jennings who is completely captivating in his role of Fabrizio’s father. Also providing welcome light-relief are Liam Tamne as Fabrizio’s tearaway brother and Cleinde Schoenmaker as his fiery wife. The stage lights up when they are on it and Tamne’s short burst of dance didn’t go on long enough!

The musical score, which mixes light opera with flashes of Broadway and pop, is deftly played by the 40-strong orchestra of Opera North, filling the large auditorium of the Royal Festival Hall with Adam Guettel’s uplifting composition. Guettel won two Tony’s for the musical when it opened on Broadway in 2005: Best Original Score and Best Composition.

The book, by Craig Lucas, is at times a little overly wordy, with long passages read from a guidebook quite hard to follow.

The story is made interesting by the revelation that Clara has learning difficulties as a result of an accident, which her mother tries to hide from her prospective new family; although we never really see Clara as anything other than an impressionable young woman, leading the audience to question whether she really is as damaged as her parents believe.

The singing is excellent throughout, although no song is catchy enough to be humming it on the train home.

The Light in the Piazza runs at the Southbank Centre until July 5th. Tickets are available here.