Review of: Fiddler on the Roof at the Playhouse Theatre

The word is bellowed out like some unquestionable, incorporeal foghorn in Nunn ‘s Fiddler on the Roof, transferring to the Playhouse Theatre after opening in the much more intimate Menier Chocolate Factory at the end of last year.

It returns, again and again, throughout the show. A klaxon through the haze.

I remember going to filmmaking class about 30 metres from the Playhouse a few years ago, where the tutor said that every story, drama, documentary etc, can always be distilled down into a single conflict between two diametrically opposed forces.

The tutor might be a wee bit wrong but it’s a fun game, trying to simplify things down into an all-encompassing two-player conflict, and it’s startling how often it works. With Fiddler, the conflict sticks out like a sore thumb: old versus new. Tradition versus modernity. Tevye giving up his daughters, seeing them fall for unfit matches, criminal revolutionaries and, worst of all, those actively oppressing.

It might be Nunn’s brilliant vision that stands out in this West End version, but it would be wrong not to highlight the brilliant work done by designer Robert Jones.

His set reaches out into the audience, envelops them, makes them voyeurs and complicit in the subjugation. It’s a brilliant reflection on how a theatre has to be delicately transformed to become a space. 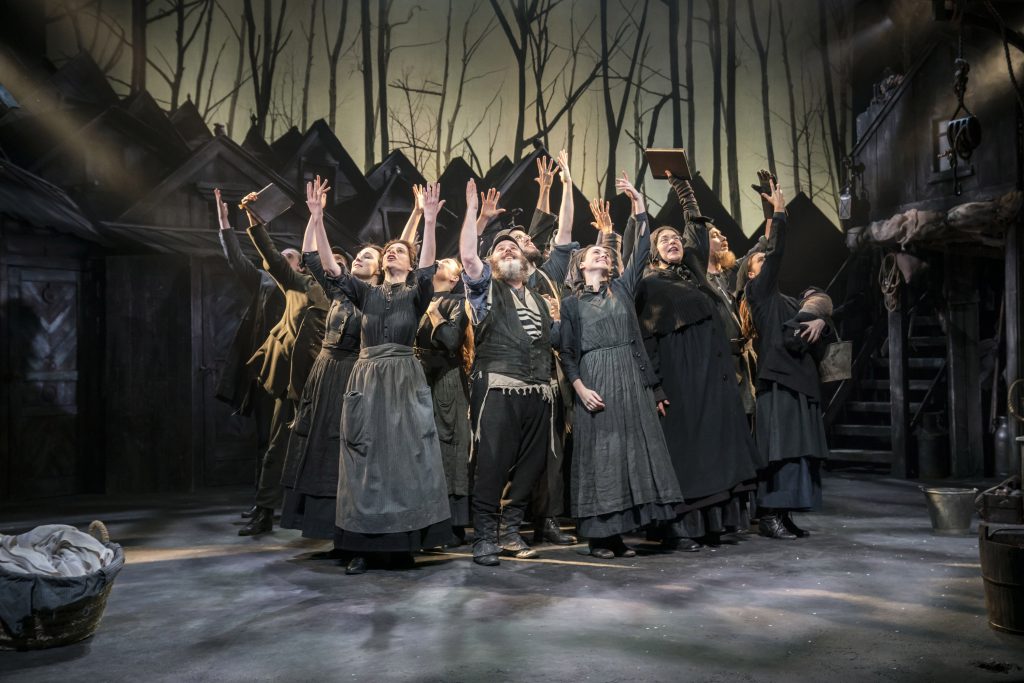 The same stands for the cast.

Andy Nyman’s Tevye, his head flung back and constantly appealing to God above (a great way to bring the circle and royal circle into the action and make them feel actively addressed) to the extent that he probably has some sort of recurring neck pain, is as iconic a leading man as you could wish – his constant ticks and trembles during If I Were A Rich Man making it obvious that is a song being felt as much as it is sung. As Sarah Crompton mentioned in her review at the Menier, Nunn has a habit of staging solos like Shakespearean soliloquies.

The performances are all top-notch – special praise must go to Judy Kuhn: stone faced, stern and warm, a perfect paradox. The choreography really is edge-of-the-seat stuff, particularly during the two big high-energy scenes (the first engagement and the wedding dance), the former in particular juxtaposing the harsh hand gestures of Cossack jigs with the all-embracing, fluid gestures of Tevye and his friends.

But tradition. Anthemically belted out into the audience. It stays with you.

This is a traditional production plugged into the present day, old and new.