Review of: Shipwreck at Almeida Theatre

Shipwreck is a play with a self-induced identity crisis.

Playwright Anne Washburn,  responsible for the quirky yet faithful Twilight Zone adaptation and the off-the-wall genius of Mr Burns, returns to the Almeida with her most ambitious piece yet, tackling a slippery, slightly orange-tinged, all-encompassing subject – the 45th President of the United States.

Commissioned quickly and programmed even quicker by the Almeida’s artistic director Rupert Goold (who directs this production), Shipwreck is, by its nature, a reactive piece of theatre. It is a direct response to, amongst other things, the infamous meeting between Trump and the then-FBI director James Comey in early 2017, where the President asked Comey to let the whole Russia thing slide. A huge, whopping big crisis for American politics.

What is striking is that Comey feels like old news. Washburn’s play already feels passé – an old video, from a time before a government shutdown and a Democrat win the house. The deck has already been reshuffled and the hands are being redistributed. Back then Sean Spicer was still a thing.

But Washburn knows exactly where she is, and where her play is being seen. Taking pot shots at the President from a cushty north London venue  isn’t exactly a challenge (heck if you wanted to make a statement you’d probably want a Brexit play with a real bit of bite there right now), but she is all too aware of who exactly is going to be consuming the three hour procedure. The vast bulk of the runtime follows seven white friends, marooned in an upstate New York townhouse which is slowly enveloped by snow, leaving them left to discuss the president while becoming increasingly isolated. 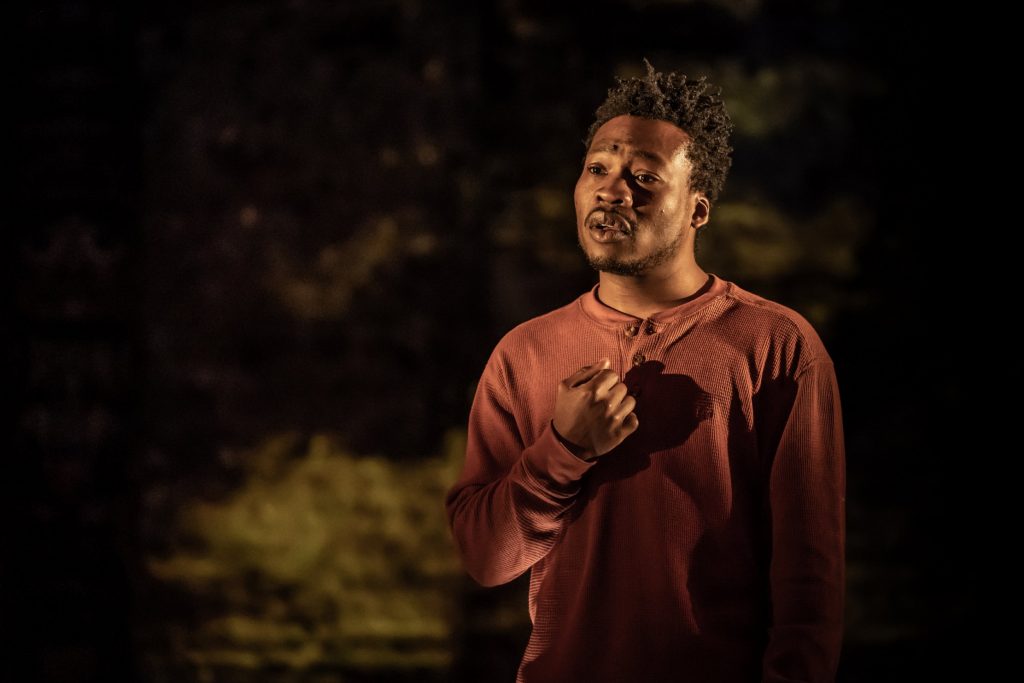 White liberals, more cyphers than individuals,  surrounded by a sea of white snow, or a sea of white faces in the audience. Under Goold’s direction, they slowly get sapped of energy, like candles choked of oxygen, drifting and by the end sprawling over the set, becoming more and more morose. Actor Fisayo Akinade (consistently brilliant), whose character Mark was born in Kenya, adopted and raised in the US, orbits the space, at one point standing in the middle of the in-the-round  stage and, (Washburn’s scripted direction states with “in light ironic mock rage”), exclaims “Oh White People, I Curse You!”. It’s all very wry.

So this is a piece that knows where it is, and why, because of the nature of its conception, it is flawed. So what, does that make it good?

Hmmm. Maybe that was never meant to be on the table.

For all its reactivity, you get a sense that Washburn is trying to tap into something deeper, more universal. The same, vague, semblance of an analysis of a human condition that Shakespeare’s history plays got so pitch-perfectly right, as she herself pigeonholes into a conversation between the stranded seven. Her structure is spasmodic – some scenes, like one where the cast discuss the potential that Trump is actually an angel, fly by in bitty fleetness, while a protracted debate over Trump’s lies and the ramifications of a Republican vote in a Purple state just drag on. At the end of act one, there’s even a fictitious fist fight between Trump and Bush Jr.

Needless to say, there’s also a lot going on.

Washburn feels far more comfortable with storytelling than sermonising, deftly constructing meaty, lofty contexts for characters to blossom and intrigue.  But all too often they slip into protracted, hypothetical soliloquy (“Maybe Trump is the antichrist?”, “Maybe Trump is an angel?”, “This is the worst lie Trump told…”) which drags.

Washburn’s thoughts on the nature of playwrighting come smashing together right towards the end of the show, when the “real” Comey / Trump meeting is depicted on stage. But instead of just playing it straight and Baldwin-esque, Washburn’s Trump (Elliot Cowan) is a mythical figure, coated in gold and sporting a huge, feathered headdress (At this point the show goes all-in on the native American aesthetic, a bold move), while Comey is sporting a plush dinner jacket. It’s simultaneously utterly contemporary and attempting to be timeless, intrinsic to the fabric of a United States identity. Trump is a cultish figure, as Washburn highlights, perhaps a Jim Jones-esque figure. Cowan’s Trump even has a necklace made of plastic tiny hands, a funny little touch from costume designer Fly Davis.

It’s the myth of Trump, the cultish fantasy of his existence, that has always existed in one form or another.

Towards the end of Shipwreck, the snow-stranded seven ponder the meaning of the end of Lord of the Rings: some find the Ring a tantalising, terrifying prospect, the chance to stare darkness in the face, to know it and quantify it. But Frodo, as Tara Fitzgerald’s Teresa states, was forever scarred by that darkness. He had to leave for the Grey Havens and is “spiritually broken”. Coming to terms with the true nature of the world can be at the expense of the self. To be swaddled in the mythic could mean to be safe. Audiences in north London are swaddled in their own myths, their own versions of events. It’s what keeps them happy, complete in oblivion. Washburn plays it out in front of them.

Would Tolkien, with his cookie-cutter black and white perspective on the world, have voted for Trump if he was still, supernaturally, still around? The guy did have a fondness for walls too – the domineering Black Gate was erected by the victorious men and elves after the Battle of Dagorlad at the end of the Second Age. Who knows. Maybe. Anyone can be seduced by the right form of mysticism, and Shipwreck bathes the foam of that insecurity. You can taste its salty twang.