A brilliant centrepiece to this year's London International Mime Festival

Sometimes when you head to the Barbican Theatre you just get the feeling that British theatre should pack up and go home. Belgian company Peeping Tom is definitely responsible for those sorts of feelings.

Returning to the Barbican following last year’s Mother (which, in a twist, is the second part in a trilogy about family, with Father (Vader) being the first part) this masterclass in physical theatre is a paternalistic examination of relationships and its various intricacies set entirely in an old person’s home.

Admittedly I didn’t see Mother or any of Peeping Tom’s other shows, so reviewing this may sort of feel like watching The Phantom Menace without knowing what a lightsaber is. But you’ve got to start somewhere.

Spread over 75 minutes, this is ethereal, haunting stuff. Under the direction of Franck Chartier, performers young and old flicker both on and off the stage and in and out of lucidity. Old age and senility become childishness in an instant – visiting family members transform into home residents. Metamorphosis in slow motion, it feels like simulated assimilation – attendants, dark-haired and hunched over, appear on the stage from some concealed entrance, shuffling forwards like something out of The Ring. At one point someone crawls off stage through a piano.

These things might have sounded farcical, and indeed to some audience members it was utterly hysterical, but for me it just felt…sad. As abstract as the show can be it’s also intensely relevant, in countries like the UK where the population pyramids are starting to be top-heavy. 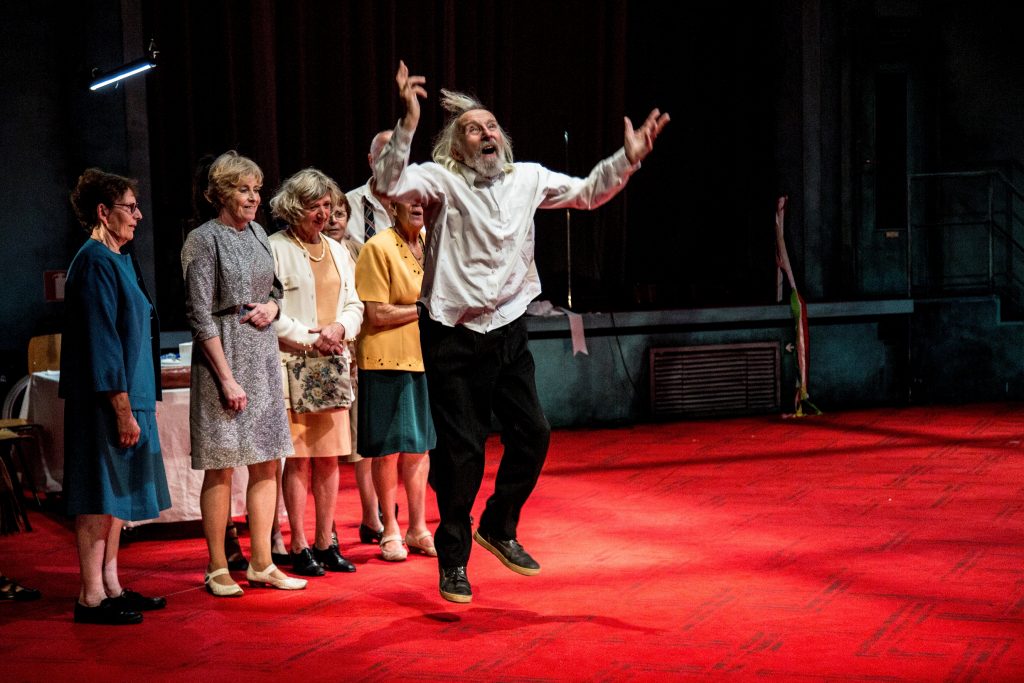 There might be a story arc involving an old man, Leo, who is abandoned by his son in a care home, but it’s a flimsy, a paltry attempt to knit together what is essentially a disparate sequence of scenes. That’s the irony – this is a care home with no care. If anything it’s defined by its carelessness. Another moment sees an attendant threatening to kill a patient, and a massive broom is swung wildly across the audiences.

Yannick Willox does some beautifully subtle sound mixing, while Amber Vandenhoeck’s set, at first simplistic, houses all manner of surprises. Physically the cast do a marvellous trick of shifting between stiffness and utter flimsiness – bodies behaving badly.

Sometimes surrealism can be the most cutting of all art forms. The nonsense on stage can reflect the nonsense outside the walls of a venue. Will there come a day when we are simply a nation of carers and those needing care? And will there be times when two generations find themselves residing side by side in the same drab, mildew-stained homes?

Probably. Maybe life and the afterlife, purgatorial and surreal, will just start to blend into one another, and that’s what Peeping Tom is going for. Maybe. Perhaps I’m just rambling, in awe of an astounding, cerebral production. Perhaps.

I can’t wait to see what the third part, Kind, has in store.