Review of: The Tragedy of King Richard the Second (Almeida)

Simon Russell Beale (perhaps one of the few actors ever to play RII after tackling Lear) stands at the centre of the stage, reading the tragic king’s monologue from act five scene five, before the show jumps back to act one. From there he faces challenges from Bolingbroke (a fantastic turn from Leo Bill, almost unwilling to accept his position of usurping king), and is isolated and condemned for his lack of foresight as a ruler. Revisionist, yes, but, so far so orthodox. Well, strap in.

The one thing that struck me during The Tragedy of King Richard the Second is that Shakespeare loves a good garden.

His plays are stuffed full of horticulture – you only need to start with the Duke of Burgundy’s hyperbolic spiel in act five of Henry V to know this a guy who likes his plant life. His house in Stratford-upon-Avon looks like the sort of digs that would be a shrine to fine gardening. His history plays have more plots and schemes than a north London allotment.

The reason why I’m rabbiting on about gardening right now is because in Joe Hill-Gibbins’ new revival of Richard II (here using the play’s full title) the cast, in neutral clothing and sporting chunky, garish gloves, look a bit like they’re all about to star in a new series of Groundforce. As Richard falls from grace you almost expect Alan Titchmarsh to emerge and admire some geraniums.

Not just that (of course!). Shakespeare lays on the gardening metaphors in his text – according to Act 3, Scene 4, Richard is incapable of pruning or weeding, with his court flatterers are “caterpillars of the commonwealth”. John of Gaunt praises the nation as “blessed plot, this earth”. There’s obviously a bit of a major vegetation vibe going on.

But does Shakespeare’s vision of Richard’s verdant, overgrown England fit with Hill-Gibbons’ truncated version, sheered down to a rapid 100 minutes? Well, no. And because of that, yes. 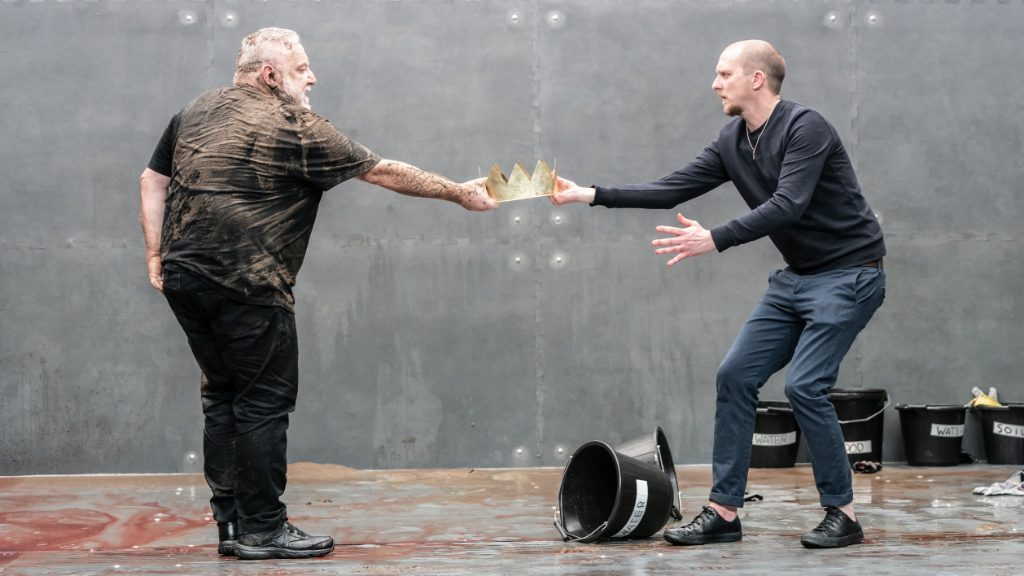 On Ultz’s flat, empty, barren, lifeless, prison cell set, nothing is natural – a cell that is far from organic. Life-giving resources like water, blood or soil are carried in carefully labelled buckets.  References to gardens feel entirely anachronistic – Gaunt’s “blessed plot” is nowhere to be found – and we come to realise that it’s all just not true. There’s no verdant nation whose future is at stake – only power squabbles over a non-existent state. The stage is dead space – there are no entrances or exits, no scene changes. The cast just bickers, and attacks, and assembles in a huddled mass to watch the drama unfold. And then it does, and the show ends.

So (sigh) what does this have to do with Brexit? A few things. The first, and most explicitly obvious, are the power squabbles that play out under both Richard and Bolingbroke, enacted by the six-strong remainder ensemble, multi-rolling with abandon, as they level challenge after challenge at one another, chucking down gauntlets with the ceremoniousness of a child in a playground. It’s only a small step from the daily televised antics in the HoC.

But Hill-Gibbons doesn’t care about Remainers or Brexiteers, he cares about the soil beneath our feet. He, just like Mike Bartlett in Albion, knows the drill. Whenever you put a garden on a stage, it means the country. And when that garden is just alluded to, mythically, then the country starts to feel like an imagined idea (despite people harping on about it). It makes all those power squabbles meaningless, a debate over a non-existent Great Britain. The fight feels pointless in what ends up being near-nihilistic theatre. Bolingbroke, Richard, who cares. Even a trip to the holy land probably won’t fix things, despite Henry’s hopes.

Which isn’t to say the concept overshadows the performances. Russell Beale is his conventional connoisseur, letting flights of fancy punctuate his tense demeanour with languishing asides. He’s a king who knows his flaws but can do little to let them wash the crown away. The show moves along briskly, uncompromisingly. If you don’t know the plot already then you may well end up lost. This is Richard II on both rewind and then speedy fastforward, an examination of the decline of an institution and the bedrock that lies beneath it.