Review of: Moot Moot at the Yard

A surreal two-hander returns to the Yard

More Details
It’s a sad fact that I’ll rarely start a review by commending top-notch work by a sound designer, but the work done by Yas Clarke on Moot Moot (which returns to the Yard following a quick spell during the venues NOW 18 festival earlier this year) is a brilliant theatrical experience – vocal distortion, sound effects, jingles, voiceovers and general aural soundscaping all combining in a genuinely novel and amusing fashion.
Rosana Cade and Ivor MacAskill’s piece is as surreal as anything you’d expect from The Yard. With the two performers dressed as identical greying, suit-sporting radio pundits named Barry – hosts of The Barry and Barry Show, the hour sees the two repeat catchphrases (“It’s all about you and your opinions… so get in touch! Get in touch! Get in touch!”), while engaging in extended skits and physical sequences, rhythmic and repetitive. Claiming to field listener calls  (we don’t ever hear more than one fragmented call) their world is unending, unsatisfying and just plain absurd.
Moot Moot is sort of like a more witty and inventive version of the middle section of Groundhog Day (the bit where Phil Connors just does newscast after newscast day after day) with some fun thrown into the mix – an extended passage with an extremely versatile pair of office chairs, an autotuned serenade under a bubble machine all being rib-ticklingly deft theatre-making. The hour is chock full of repeated beats – lines, gestures and blocking restarted as each new day of The Barry and Barry Show feels exactly like the last. Purgatory never felt so whimsical. 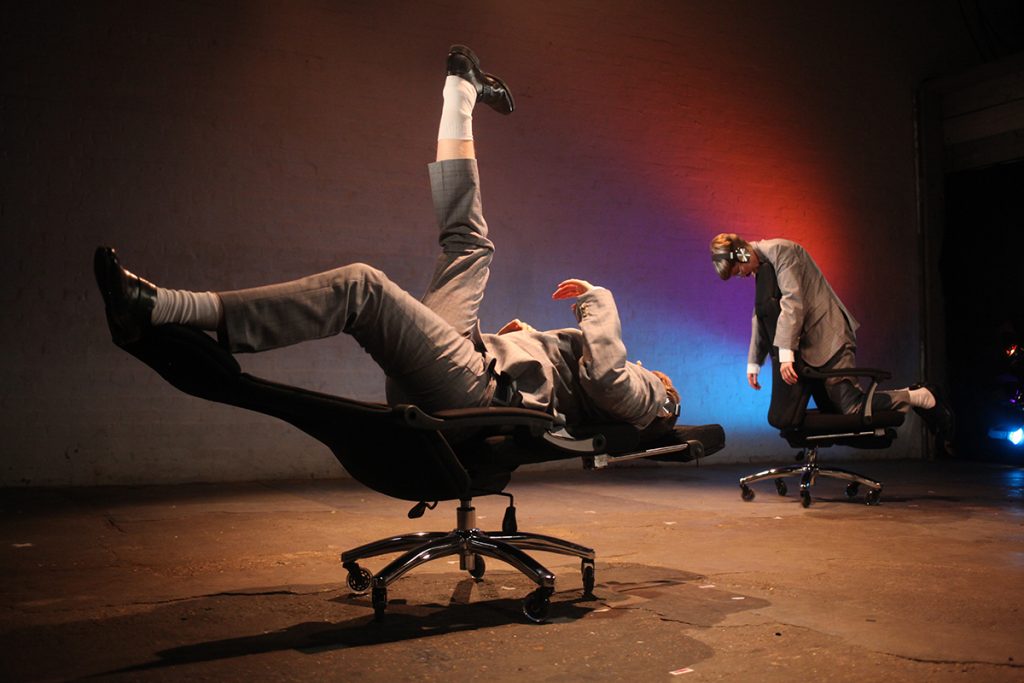 While the piece is as marvellously inaccessible (with some cracking one-liners) as it is amusingly frustrating, Moot Moot feels like there’s less than an hour’s worth of material on hand- while the skits themselves are cannily conceived, there was always a craving for more, a few extra beats crammed into the hour. It’s more experiential than a spectacle. Admittedly,  this could well be the point – a show so obsessed by the vacuousness and tedium of traditional media that it itself starts to take on the very qualities it tries to parody. There is no catharsis, no lovely little conclusion or neat, pacy structure. But, as the show angles for, there isn’t one in life either (wahey!).
It’s a piece defined by what it isn’t and, while not perfect, Moot Moot feels like it’s pretty close to reaching the point at which inanity becomes profundity.
Moot Moot is on at The Yard until 10th November. Tickets start at £15 and are available here.