Review of: Macbeth at the Sam Wanamaker Playhouse

A drum, a drum, another Macbeth doth come. The National’s version may have been critically murdered more brutally than a Scottish monarch (it’s now touring) when it premiered earlier this year, the RSC’s iteration was met with mixed reactions (now at the Barbican) while the NYT is about to present its own spin at the Garrick Theatre. How would the Globe’s production, sporting real-life wife-husband combo Michelle Terry and Paul Ready in the two lead roles, fare in what clearly has been a hit and miss year for the tragedy?

Well, thankfully, Robert Hastie knows how to craft a pretty solid production out of Shakespeare’s text. With little but candlelight to help illuminate the stage (burning through more wax than Madame Tussauds I’d estimate), the show is a chiaroscuro lover’s wet dream – perfectly using darkness when necessary to capture the brooding intensity of the tragedy, a flickering, fickle sense of illumination that permeates through the show.  Running at little over two and a half hours, only a few passages let the momentum dwindle.

Ready isn’t a macho, mud-stained Macbeth like Kinnear was, or the hardy, grizzled figure that Eccleston portrays. He’s a softly spoken, suburban product, a family man without a family. As he progresses through from thane to monarch, his sense of impunity is portrayed by Hastie more like an ongoing regression, becoming infantilised, swatting away a murderous Macduff like an annoying fly. It’s an intriguing and fruitful take on a character many would feel like old ground. 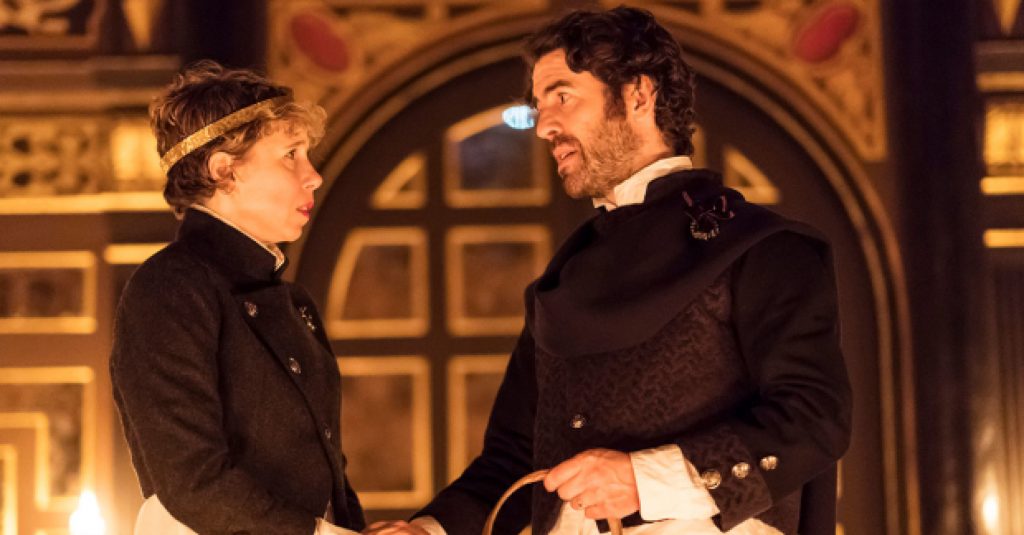 Terry gives a brilliant performance as Lady M, leagues above her Hamlet earlier on in the Summer season. It’s a shame that Hastie doesn’t give her more stage time – her transition to madness feeling somewhat rushed, a speedy descent that could have benefited from a few more moments of quiet characterisation.

Played on the sparse yet ornate Wanamaker stage, the show certainly feels like it really treads its ground assuredly but rarely innovatively – a straight-laced, boots and braces affair. The one stand-out moment is Hastie’s version of the second witch visitation – played out in near-darkness, with the patter of invisible feet representing the different spirits visiting the Scotsman.

It’s refreshing to see a production that manages to just, well, hold it all together. A conceptually sound and solid version of one of Shakespeare’s greats.