'Brexit' is a sound political satire at a time when it instead could very easily have been exciting, biting, and brilliant.

There are few occasions I would welcome these days that give rise to thinking about the headache that is Brexit, and dedicating one’s night to it is perhaps an exercise in naivety. If you’re still keen, however, Brexit is the fifth play from writing duo Robert Khan and Tom Salinsky, which premiered at this year’s Edinburgh Fringe Festival, and has since transferred to The King’s Head Theatre in Islington. 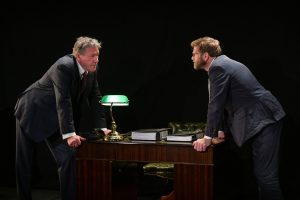 It’s pretty undemanding as far as political satires go. The plot follows new PM, Adam Masters (played competently by Timothy Bentick), as he tries to survive his first few months of office in 2020, where the terms of Brexit still have not been finalised. A typical push-pull between political self-preservation and doing one’s job, the main motivation of the play sees Masters’ attempted manipulation of staunch Remainer Diana Purdy (Pippa Evans) and smarmy Brexiteer Simon Cavendish (Thom Tuck), to keep the situation in limbo long enough for him to see out his term.

The humour is very tongue-in-cheek, with off-hand lines such as mentioning Diana as having held the post of ‘Unpaid Minister for Women’s Rights’, and the style is painfully reminiscent of that grand old satirical institution, Yes Minister. If pressed, I would be tempted to suggest that this audience’s target demographic in fact enjoyed switching the telly on to an episode of this very show in the early ‘80s.

And therein lies the main hurdle of the show. The idea of not committing political suicide being at odds with the needs of the many is nothing new – it is arguably politics’ #1 enemy. The twist-come-punchline of ‘Don’t try to out-politick politicians.’ is overplayed. In satire, the only way to inspire interest is to create something vastly more intelligent than your audience and leave them with something new to think about, in which capacity, unfortunately, Brexit falls short.

Despite this, I’m sure I’m not alone in being more than likely nowadays to greet any mention of Brexit with an eye-roll, so I suppose it is nice to have the opportunity to put months of dredging through bleak and convoluted articles and think-pieces to good use and laugh about it for once.

Brexit is at The King’s Head Theatre until Saturday 17th November, at 19:45 (with Sunday matinees at 15:00). Tickets are available here.