Review of: War with the Newts

A highly recommended viewing experience for those looking for something a little different: engaging, thought-provoking, and hugely enjoyable theatre. 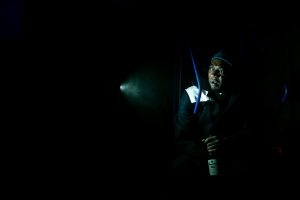 War With The Newts
Edinburgh Fringe 2018
©The Other Richard

“How would you rate your brain function since the crisis on a scale of orange to blue?” is just one of the questions you might be asked as you board what used to be an oyster dredging vessel, now repurposed as a refugee ship to take us, Wilderness Refugees, to the Colony for safety. It’s a fun an immediately immersive moment, with a category stamped on the back of the hands of audience members indicating to the crew how they should treat each individual and where they should be seated, or if they are allowed to choose.  This production could have built more on these immersive foundations: having worked so beautifully to create an immersive and engaging atmosphere, the categorisation could have been dug into a little deeper, with more tasks or privileges highlighting differences in status and creating more of a frictional divide amongst the refugees/audience. It would have been an interesting experiment to push the psychology of these categories, particularly as the play progresses and boundaries between justice and exploitation, newts and humans, begin to disintegrate and blur.

The set is flawless, with exceptional use of audio-visual adding both to the futuristic sci-fi element of this narrative and to the immersion of the audience in the production, with incredibly effective use of surround sound. The televised guides, three animated faces on three separate screens, are another particular highlight, again blurring lines between tech and humanity: it is unclear whether these are real people somewhere on the ship, or simply Siri-like algorithms, ghostly tech projections. The team of three actors do a fabulous job multi-rolling as part of the entertainment technology, powering down very convincingly at the end of each segment and glitching when the files become corrupted in a disturbing choreography of twitching repetitions. This aspect is slightly confused by the welcome we receive from these actors as crew members: in an ideal world, the actors would only appear as the entertainment projections, and all the welcoming onboard the ship would be done technologically in order to keep these distinctions, and a sense of alienation from these other humans, running. Nonetheless, each actor works hard to bring a variety of different characters to the stage, with new characters quickly and smoothly introduced so the action of each episode can keep running. There are some excellent stylistic choices, which work to engage the audience on both a visual and a philosophical level. A stirring speech made by a Welsh investor, stood on a pedestal in the middle of the stage and lit angelically from above, works in contrast to a cartoonish episode of Dissection Live, which again contrasts with the finding of the newts, told by the captain of the ship lit only with the torch from an iPhone.

There’s quite a lot to keep up with, narratively speaking, and sharp turns in tone and content are navigated well with tech and actors in sync, although at moments the audience felt left a step or two behind. The choice of on-ship entertainment is perhaps a curious vehicle: it seems odd that refugees would be shown a potted history of how they came to be refugees, as they attempt to flee the crisis. More likely would be projections of a utopic future in the Colony, yet nonetheless this is an inventive device and the narrative is so gripping that we allow the slightly spurious logic of entertainment choice to slide. This is a bold and intriguing piece, raising a multitude of timely questions that are bravely left unanswered, the audience having to navigate their own way through the seas of uncertainty. A highly recommended viewing experience for those looking for something a little different: engaging, thought-provoking, and hugely enjoyable theatre.