Mrs Dalloway explores the composition of character through an intricate interweaving of dialogue, reminiscent of Woolf’s own rendering.

To effectively translate Virginia Woolf’s stream-of-consciousness style writing to stage is undoubtedly an ambitious task – a task which, in general, is met with aplomb by Hal Coase and the cast of this new adaptation of Woolf’s 1925 novel, Mrs Dalloway. At times, however, the intricate knotwork of dialogue – an understandable response to Woolf’s own braided depiction of life and London in post-World War I England – verges on stilted and slightly conceited.

A study of character and the creation of characters, the play opens with two of our cast introducing themselves and their fellow actors – as actors – to the audience, awaiting the entrance of the titular character, Clarissa Dalloway. Slowly, the actors meld their own personalities to their written characters and the play (though it has already begun) begins. The study of character continues as we explore a day in the life of Mrs Dalloway and others experiencing London in post-World War I Britain. Monologue, dialogue, interjection, introspection and citation creates a rather word-heavy vehicle, but ultimately it is to the great credit of a talented cast of five that the convoluted subject matter does not escape the audience.

With the exception of Clare Perkins, who studiously paints the character of Mrs Dalloway with a subtle empathy throughout, all actors deftly take on a wide array of characters, jumping from emotionally affecting to uproariously entertaining at the drop of a hat. Guy Rhys (Septimus) and Sean Jackson (Peter) both give dignified performances as a man in distress at the state of humanity and a jilted admirer respectively. By far the most compelling, however, are Emma D’Arcy (Rezia, as well as Artistic Director of this production) as a young wife in a foreign country, and a daughter stifled by high society, and Clare Lawrence Moody (Sally) as the confident friend from youth, and short-lived but memorable born-again Christian, among others. Interesting flashback scenes interspersed throughout allow the actors to add the fourth dimension of time and complete our study of the characters as we see how they have changed and developed – are we who we were, or who we have become? 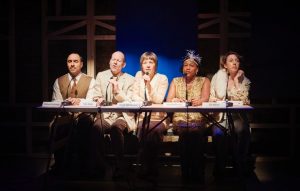 There are exciting moments of innovation with some ideas played out very effectively – interjections from different characters vying for attention through a mobile podium and microphone, a city soundscape created through tape recorders operated on stage by the actors, and, perhaps most memorably, the dynamic panel-style arrangement of Mrs Dalloway’s party. A lone window panel is the focal point of a simple, but effective set, and welcomely assures no distraction from the actors, but rather reinforces the notion of passing time with the addition of a second off-centre panel as we unceasingly move through the day towards evening.

There is a beautiful passage near the beginning of Woolf’s book, recording Clarissa’s musings on the state of the world as she has come to understand it from her small pocket of society in London, and on the ephemeral and ethereal nature of human history. It is one of many moments of respite in an otherwise busy and intricate webwork of perception and introspection. Unfortunately, in this production, it feels there are too many missed opportunities to give the audience the chance to find relevance or interest. Where Woolf’s novel is successful in stimulating introspection, the unforgiving pace and vacillating nature of the dialogue in Coase’s production leaves very little space for interpretation, which seems to be at odds with the intention.

Despite this, the production is a valiant effort at translating philosophies that are somewhat beyond the spoken word. The exploration of character and general theme remain intact throughout, and the timeless, overriding question of what creates a character, a person, a history, a life, will not go unnoticed, though one must permit it to go unanswered.

Mrs Dalloway is at the Arcola Theatre until Saturday 20th October, at 20:00 (with some Wednesday and Saturday matinees at 15:30). Tickets are available here