Review of: A Guide for the Homesick

A Guide for the Homesick fails to take us far enough into unexplored territory to have any need for a guide in finding our way back.

A modern, sterile hotel room. Familiar and foreign all at the same time – this hotel room could be any hotel room, anywhere in the world. A sitcom is playing on the small flat screen tv. It could be an episode of Friends, but for the fact that it’s in Dutch. You feel wonderfully out of place and yet right at home, and it’s a feeling that by all rights should have pervaded the entirety of Ken Urban’s A Guide for the Homesick.

Except… it’s all somehow too neat. Two strangers, by chance from the same area of US, find themselves by chance at the same hotel bar in Amsterdam, both, by chance, facing pretty significant junctures in their lives that are, (say it with me now) by chance, tied to close friends in peril – and it’s not so much the meet-cute that’s bothersome, as it is the way the audience is hand-held all the way through to understanding just how cute the meet is. Jeremy (Douglas Booth), a somewhat closeted bisexual, has followed Teddy (Clifford Samuel) a decidedly out homosexual, to his room at the hotel, and so begins the hour-and-a-half-long struggle to expose as much of their emotional fragility to each other as it takes that we can all arrive at the end of the play together, holding a bundle of intense and complex issues cut up and tied together neatly with a bow. 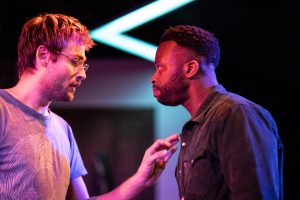 The scenes are played out mostly under the pretence of filling the silence as Teddy expresses he does not want to be alone, and Jeremy struggles to decide if he’s coming or going. So, without much to help us in the way of impetus, the plot is revealed in surface-level accounts given by each character of the past few days/weeks/months, leapfrogging between flashback and hotel room, as the strangers lie and revise their stories and threaten to leave, in a somewhat flimsy portrayal of a road towards trust. Or if not trust, then the happy coincidence of finding someone else in Amsterdam who simultaneously speaks American-English, and cares so much about their own problems that they are the perfect candidate to pay just little enough attention to the other’s that anything at all could be a silence-filler.

Both actors also take on the roles of each other’s counterparts in their stories, and to the credit of Booth and Samuel, their portrayals of all four characters were well executed, with the switches between character flawless and unforgivingly quick. Samuel, in particular, carries the weight of his secondary character with believability and compassion, and you can feel the direction of Jonathan O’Boyle grasping at a deeper connection between the two main characters, but it never comes to fruition.

It’s a shame because the subject matter has obviously been well-researched, and is in itself emotionally packed enough that the play should hit hard. Unfortunately, it ends up being too deliberate to feel familiar, and too uninteresting to feel foreign.

A Guide for the Homesick is at Trafalgar Studios until Saturday 24th November, at 19:45 (with Thursday and Saturday matinees at 15:00). Tickets are available here.