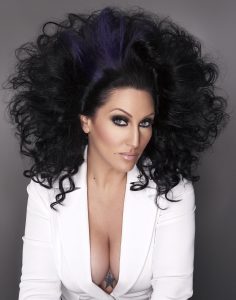 Everybody’s Talking About Jamie is pleased to announce that internationally renowned personality, Michelle Visage, will be making her West End musical debut playing the role of Miss Hedge from Thursday 18 October 2018 to Saturday 26 January 2019 at the Apollo Theatre.

Michelle said: “I am BEYOND thrilled to be making my West End debut in Everybody’s Talking About Jamie! The reason I chose this show in particular is because of the very important message it tells. It is a great show with great music and talent but more importantly it’s about love, truth and the tenacity of the human spirit! Also there is a HUGE bonus: I get to live in London, one of my favourite cities in the world! I can’t wait to help audiences to fall in love with the show the way I did when I saw Everybody’s Talking About Jamie for the first time and understand why everyone REALLY IS talking about Jamie!”

Michelle is an internationally renowned, platinum selling recording artist, actress, author, television personality, podcast co-host, radio show host, who has made a name for herself in the entertainment industry, across multiple mediums for the past three decades. Michelle is best known in the UK for being a judge on Ireland’s Got Talent and America’s hit TV show RuPaul’s Drag Race, which recently won Outstanding Reality-Competition Program at this year’s Primetime Emmy Awards. Michelle hosts a podcast with RuPaul named RuPaul: What’s the Tee with Michelle Visage which won the award for Best Host at this year’s 22nd annual Webby Awards. Michelle was a finalist on Celebrity Big Brother in 2015.

Everybody’s Talking About Jamie opened at the Sheffield Crucible in 2017 and is now playing at the Apollo Theatre in the West End, currently booking until 6 April 2019. As well as receiving 5-star reviews, Everybody’s Talking About Jamie was nominated for 5 Olivier Awards, received the UK Theatre and What’s On Stage Awards for Best New Musical and won theAttitude Culture Award 2017. Dan Gillespie Sells won Best Composer at The Stage Debut Awards, John McCrea won the What’s On Stage award for Best Actor in a Musical, the UK Theatre Award for Best Performance in A Musical and was named joint Most Promising Newcomer at the Critics Circle Awards and Lucie Shorthouse won the What’s On StageAward for Best Supporting Actresses in a Musical.

To book tickets call 0330 333 4809 or visit the website at:  www.nimaxtheatres.com  / www.EverybodysTalkingAboutJamie.co.uk. Performances are Monday to Saturday at 7.30pm, Matinees – Wednesday and Saturday at 2.30pm, and ticket prices range from £10 to £65.