Milly Thomas’ solo show Dust, telling the story of a woman after she kills herself, took the Edinburgh Fringe by storm last summer before transferring to the Soho theatre. This autumn the play is on for an extended run at the Trafalgar Studios, and we caught up with Milly before the show opens to find out how it’s all going.

Where did the idea for Dust come from, and why did you decide to make it a one-person show?

I had the idea for a while. I was obsessed with the way we eulogise people, the depiction of suicide in the media and, I guess, the way depression can make you feel like a tourist in your own life. I had originally pitched it in a different form and it was roundly rejected and, where I’d normally pick myself up and make something else, I really believed in the idea. I think I was so desperate to make it work and hadn’t quite communicated what I’d intended via applications so had the thought ‘I think I’ve got to do this myself’. I always knew I was going to act in it, or at least wanted to. But when it became a monologue suddenly I found myself free and able to play, which in turn helped Sara (Joyce – director) craft and dramaturg. I also found the experience of a one-person show reflective of what depression is: Lonely. Being all things to all people. Exhausting. But in a safe environment where it felt right and without permanently damaging one’s mental state! 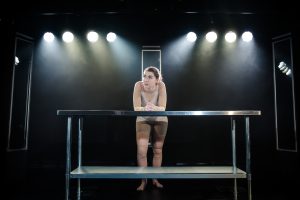 Has the show changed since Edinburgh last year, and Soho? How are you feeling about moving into the West End and having a slightly different audience in?

It’s been fascinating to watch it change and feel the audience respond to those changes. I think because Edinburgh was always bound by a time frame we were so conscious of what we were losing. At the time all I could see was parts we were losing, that eventually turned into the show and the bits we’d cut were completely forgotten about. Then suddenly we had the opportunity of the run at Soho and those forgotten bits came floating back. It’s then interesting to see what you actually do need or if it’s just one’s ego telling you to hold onto something because you think it’s funny. It might just be you! I’m so excited to have a different audience come in. Otherwise, the play becomes an echo chamber. It has existed thus far as speaking out to people. But we’ve focused less on people leaving going ‘I had no idea that people feel that way’ and a wider catchment is going to bring those people in and I feel really thrilled by that. It’ll mean harder work as a performer but I’m relishing that!

How do you prepare yourself for a performance of Dust?

Honestly? I don’t. I mean don’t get me wrong, I make sure my voice is warm and my body is warm. But that usually consists of me dancing and singing along to shit chart music and trying to get the venue staff to join me. But emotionally there’s nothing you can do. Because every time I tried in rehearsals or previews to ready myself, I ended up end gaming the show. All I can prepare for is what she thinks is coming. Which is death. Which is, she thinks, nothing. I’ve found I’ve got to let it happen to me and not the other way around.

It’s been kind of astonishing and something I hadn’t quite anticipated on the scale it’s been. I think I knew that it affected a lot of people (obviously, otherwise I wouldn’t have made the show) but the sheer outpouring really shook me. It was people I knew extremely well. Strangers in Edinburgh on the street. People on the tube. Twitter. It’s incredible and sad and powerful. We’ve got to alleviate the stigma so that we don’t feel ‘underground’ with it all. Every time I thought to myself ‘I do bang on about mental health a lot. Maybe I should chill out a bit’ there was yet another story in the paper. Something utterly preventable. It’s led me to taking my own health more seriously and talking about it as openly as though it were flu. If we don’t look after ourselves then we cannot help others.

Dust by Milly Thomas is on at Trafalgar Studios 2 from Tuesday 4th September – Saturday 13th October 2018. Tickets start at £15.50 and are available here.