Exactly likes its namesake, Flies will buzz around your head, and poke, irritate and settle on to you until you can think of nothing else. A masterful script, three energetic and enviably talented performers, and yards of surprise clingfilm – it’s the perfect Fringe show. Just don’t expect to ever see flies in the same way again… 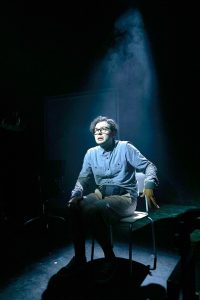 Fringe veterans Les Enfants Terribles clearly know the formula for success: a catchy, universal topic, anarachic and technically impressive staging, with just a hint of ‘did I get hit on the head before the show started and this is my subconcious running riot?’. Flies is a feverish, thrillingly unpredictable descent into one man’s struggle against his pteronarcophobia (that’s pathological fear of flies to the rest of us). Prepare to feel physically sick, but in a confusingly good way, as the performers speed through this accomplished and more than a little bit disgusting comedy.

Talent shines out of every element of this production – Piers Hampton makes a disarmingly atractive lounge-singer-style fly, making the audience fall a little bit in love with him whilst he’s telling us just how he’d crawl into our own brain and vomit and shit everywhere. Newly graduated George Readshaw is certainly one to watch – his debut performance as earnestly manic Dennis, who’s fear of flies is so ingrained he blocks up all his plug sockets, is overwhelmingly accomplished. Lastly, Harry Humberstone as the onstage musician, foley artist, and performer is the delightful hidden gem of the show, with remarkable timing and physical comedy.

Anyone who is familar with Les Enfants Terribles will not be disappointed with Flies. Oliver Lansley’s script plunges enthusiastically into the absurd, and is handled sensitively by directors Emma Earle and Hannah Drake (of Pins and Needles Productions). Their skillful management of this fast paced work leaves you gasping for breath just as the lights come up.

Flies is playing at Pleasance 2, Pleasance Courtyard, every day at 5pm until Monday 27 August (no show on Monday 20 August). You can buy tickets here.