Drip, a one-person musical about a 15-year old boy who signs up to Hull’s first synchronised swimming team – despite the fact he can’t actually swim – premiered last year as part of Hull UK City of Culture, and is coming to Summerhall later this month. We caught up with Andrew Finnigan, reprising his role as Liam, to find out how the show is going. 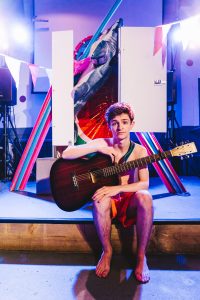 We’ve just come from our technical rehearsal for the show which is a little unusual to do tech before rehearsals but with the logistics of the Fringe that’s how it goes! It was really great to get into the space though ahead of rehearsals just to get a sense of how the show will sit there and Adam Foley, our lighting designer, has really worked his magic with the help of the Roundabout team to conjure up some pretty dreamy stuff for the show. I’ve not long finished work on a play, and I’m convinced my brain has a strict ‘one script at a time’ policy. Thankfully we have a couple of weeks yet until we start rehearsals, which means, my head will be well and truly buried in my script and music sheets, with the help of plenty cups of tea to see me through (always PG Tips by the way).

How has Drip changed since its premiere last year?

Since we’re taking Drip to Paines Plough’s Roundabout, our biggest change for the show is that it’ll obviously now have to be performed in the round. That’ll be something that Jane and I can work on in rehearsals but that’s another reason I think it was helpful for us to have that early tech, as we already started having ideas on how effectively we could use the space.

Really though, the show hasn’t changed all that much. I think that’s the beauty of it though. As long as you have Liam, his guitar and his story the show really will work anywhere.

How are you finding being in a one-person musical?

Doing a one-man show was a little target I’d set myself for work pretty early on and something I honestly didn’t expect to be doing so soon. The biggest fear I had going into the show was mainly the worry I had about keeping my energy up and holding the attention of an audience for a full hour. I think that worry kind of melts away though when you know you’re dealing with Tom and Matthew’s work. Their dialogue and music have a lovely balance which really helps me with the flow and pace of the show. Having the audience getting involved too is another really fun aspect of the show. I find it helps make the show feel like an inclusive story rather than separating it into a strict audience and performer convention.

What does the show tell the audience about Hull?

During the writing process, Jane [Fallowfield, director] and Tom [Wells, writer] did a lot of work with the Shout Group, a young LGBTQ group who meet weekly in Hull. They workshopped a lot with them just to hear more from young LGBTQ voices, which hopefully translates into the show.

In the show, Liam has not long moved from South Shields (my ends) to Hull. Leaving behind friends, family, schools etc. and moving to a new town at 15 is obviously a massive transition, and for Liam, who maybe struggles to fit in more than others it’s extra difficult. With all this going on though, it really shows off everything great about Hull and is totally a celebration for it. Hull is increasingly becoming a really exciting place to be for artists, I love it.

Drip is on at the Paines Plough Roundabout, Summerhall, from 20th-26th August at 18.55, before heading on a tour of the UK later this year. Tickets start at £12.00, and are available here.