If you want to go to Vertical Influences – which you should, more than anything else you do this festival – you first need to wrap up warm (even more than you have been), and then get on a short bus out of town. After getting off the bus, you walk to Murrayfield Ice Rink, a 1952 building dwarfed by the huge stadium next to it. You go inside, greeted by the weird smell of feet + cold + something else that all ice rinks seem to have, and as you step into the rink, you seem to enter another world entirely. 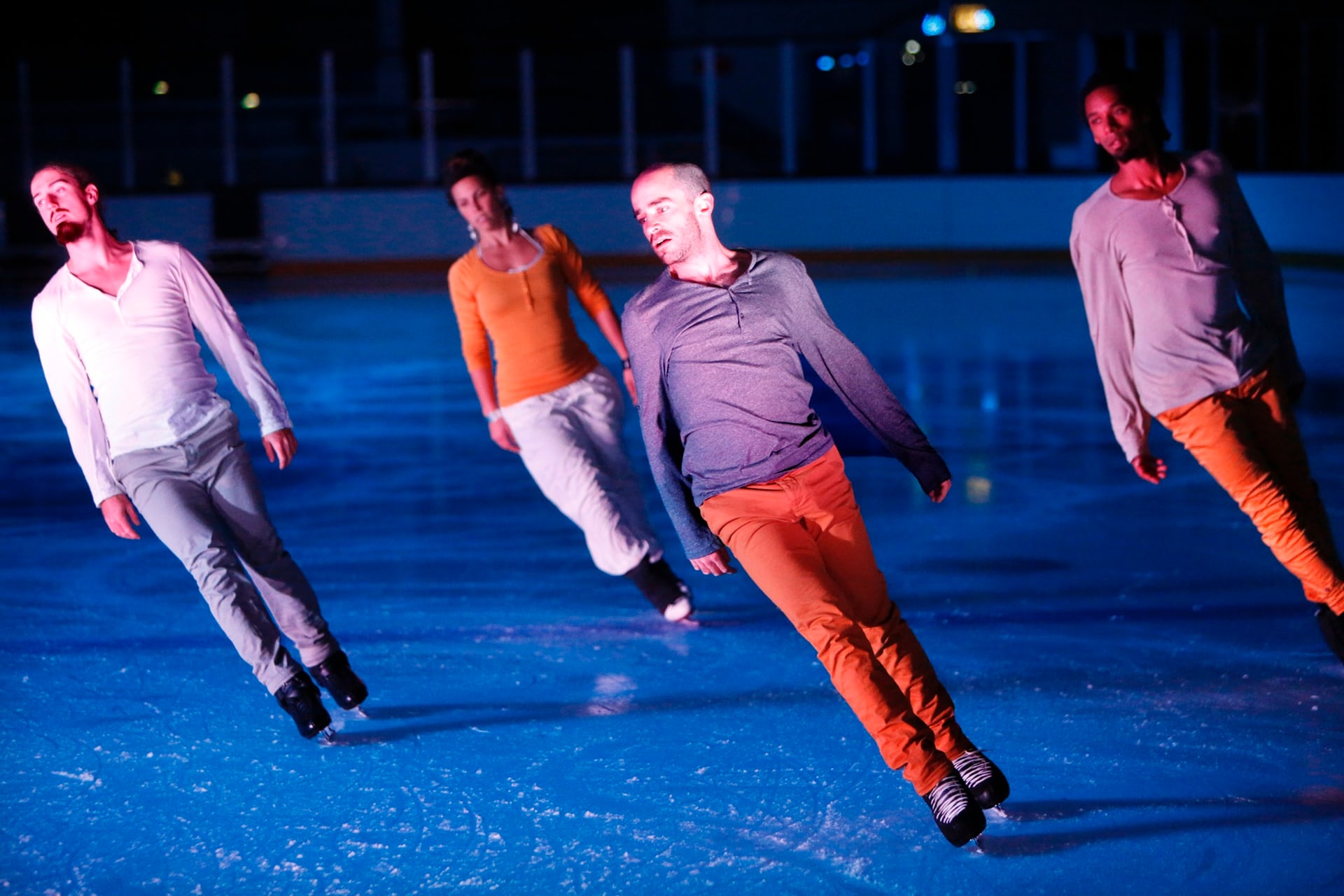 It seems important to state here, before this review goes any further, that I absolutely adore figure skating. It’s the passion that has allowed me to finally understand why straight men do the football thing. I agonise over the skating: I stay up late on forums, watch jump after twizzle after fall, make disastrous attempts to recreate it in my own time, and bore everyone within arm’s reach with stats and trivia and figures.

Vertical Influences is actually two shows, with a fifteen-minute interval so that you can leave the ice rink and warm up (and presumably so that Le Patin Libre can do the same). We watch “Influences”, the first, from the stands of Murrayfield Ice Rink, looking down on the skaters from above. It feels like how I imagine watching molecules and atoms wham into each other might do. Which seems fitting, really, for a piece that appears to be about the forces we exert on each other: the pushes and the pulls, the influencing and pointed independence. Watching Le Patin Libre skate in gorgeous, fluid figures, it is as if we are watching the universe on a micro and a macro scale. They combine perfect synchronisation with breathtaking solos, all in an impeccably put-together programme that never puts a foot wrong.

If “Influences” makes us feel huge, “Vertical” shrinks us to ants. For this shorter part, the audience is sat on the ice – some cross-legged on pillows, able to feel the cold through the blanket below – and Le Patin Libre skate within metres of us. They look like demigods, skating straight towards us at huge speed, backlit and as graceful as if they are somehow floating. It is ethereal, the lighting and the sound from Lucy Carter and Jasmin Boivin respectively (the music designed to complement the sound of blade-hitting-ice) and the freezing cold making the whole experience surreal and hypnotic.

The skating itself across both shows is extraordinary. Don’t expect the Olympics: it’s contemporary skating, played out over a gruelling 45 minutes rather than just under 4, and it’s not about the jumps (although they appear). Instead, Vertical Influences focusses on precision, on absolute synchronisation, and on movements that weave miniature stories.

It’s on a different plane to the rest of the Fringe – the rest of the planet, perhaps – and yet the cast are so joyful, Samory Ba pausing at one point to laugh at the fresh snow kicked up onto the audience, clearly having the time of their lives. Watching Vertical Influences, it feels like a privilege to watch them work; to experience such unparalleled wonder in the midst of the Edinburgh chaos.

Vertical Influences is on 24th and 25th August, at various times. Tickets are £17.50 or £15.00 concessions and are available here.