Review of: Year Without Summer

Interpretation of the conception of Frankenstein does little to reveal.

In 1815, in the Dutch East Indies, the supervolcano Mount Tambora erupted, with worldwide devastating effect. Across the world the sun didn’t shine, crops didn’t grow, and many thought the end was nigh. Included in this number were a group of exiled poets taking refuge from gossips in Northern Italy. Lord Byron, Mary Wollstonecraft Godwin (later Shelley), Percy Bysshe Shelley, and their circle, stuck inside, entertained themselves by telling ghost stories – one of which, famously, became the novel Frankenstein. Mary’s sister Claire had connived to bring the group together in order to seduce Lord Byron again, and Byron’s narcotic-providing doctor Polidori regularly wrote back to England in sordid (and expanded) detail about the devilish work the circle got up to. 2018 is, of course, the bicentenary of Frankenstein’s publication, and so it’s a story currently close to the cultural epoch. 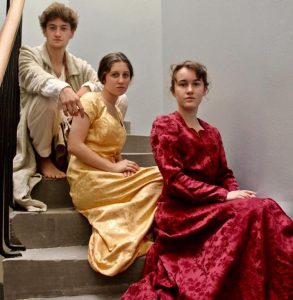 It would be fascinating to see a play that revealed the intimate conversations, the strained relationships, and the day-to-day goings on of the young Romantic circle during this time. Unfortunately, Year Without Summer was not this play. Instead, the piece consists of reiterated facts and oddly emotionless conversations, at best strange and at worst dull. Writer-director Andrew Allen regularly confuses archaic language and weird inflexions with wit and poetry.

The two sisters, Mary and Claire (here half-siblings, in actuality step-sisters) come the closest to genuinely engaging scenes, but every time they seem half on their way to expressing a real emotion, they jump back into robotic expositional dialogue. Allen seems determined to remind us how many biographies he has read by inserting clunky biographical gobbets. Clumsy, slight misquotations of Frankenstein are all that serve to interrupt these speeches, aside from awkward references to ‘raising from the dead’ – perhaps designed to tie the lack-of-plot more closely to the familiar.

The actors’ responses to the script are unenthusiastic and attempts to infuse the dialogue with life or emotion feel halfhearted. Morgan Bradbury’s (Clairmont) seduction of Byron is fabulously unseductive, and it’s not ever quite clear why exactly she’s so obsessed with him anyway. It seems ironic that one of the show’s central themes is how the characters have to fight their own reputations and try to become people outside of them, when Year Without Summer hangs it’s entire appeal on the audience’s own knowledge of Frankenstein and the young Romantic circle, never venturing to add it’s own original thought.

Year Without Summer is on at Sweet Grassmarket until 26th August. Tickets are £8.00 (£6.00 concessions) and available for purchase here.