Moments of brilliance don't quite save this structureless story

It has been almost 30 years since the Berlin Wall fell, and for a large number of the worlds’ population, it is history, outside of their lifetimes. Myself included. Katherina Radeva’s one-woman show, “Fallen Fruit”, which tells her own story of 1989 from deep inside communist Bulgaria, seems necessary. Radeva tells the story from within walls of her own making, tiny cardboard boxes that she uses for various purposes (both building them up and knocking them down), and dressed as the schoolgirl that she was at the time. 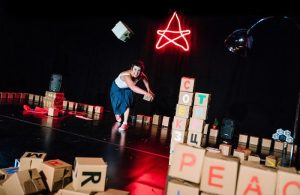 It’s clearly gesturing towards childhood, and young girl Katherina appears a lot over the course of the play. She’s one of a group of characters, none of whom seem quite well distinguished enough to tell the stories Radeva tries to tell. Alongside her own experience of 1989, she also tells us about a lesbian couple who are vaguely tethered to the story through being “friends of her mother”, and at one point diverges into a strange audience-interaction-type segment in which she becomes a television presenter hosting a quiz.

There are compelling moments in this: the moment when lovers split up, one to escape and one to stay; a moment of monopoly when young Radeva and her mother find themselves next to a lorry throwing out cans of beetroot and packets of Nesquik. But these are too few and too far between for Fallen Fruit to be wholly satisfying. The piece is jolty and inconsistent, Radeva jumping between storylines seemingly at random, and lingering too much on others. The performance that I saw also overran by 10 minutes, and so I wonder if much of this came from too much adlib. Whatever the reason, Radeva’s storytelling often drifted, and it became hard to follow the stories and to understand why we were listening to them. There was no purpose in how she told her story, and the piece didn’t do her own history justice.