Review of: Sounds and Sorcery

Beautiful spectacles based on Disney's Fantasia with a slight lack of narrative drive.

Following Alice’s Adventures Underground, The Vaults’ last large-scale, in-house, immersive production, their latest is a conceptually daring, theatrical adaptation of Disney’s Fantasia. The venue’s tunnels have been transformed into scenic interpretations of the different musical segments from the original 1940 cartoon. The environments are refreshingly varied: in one, the audience gather in pews and have water flung at them by dancing servants (it’s a few cups worth, not log flume level, don’t worry), getting control of a sorcerer’s spell book, causing catastrophe in their
master’s absence; in another, Mushrooms glow in the dark, lights skitter across a frozen lake and a woman floats mysteriously in a holographic pool. 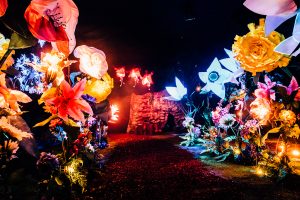 Upon entering you’re given a pair of headphones to wear throughout the experience. As you move freely between the different areas, the music in your headphones changes to match what room you’re exploring. Although occasionally feeling like a very surreal museum audio guide, the headphones immerse the listener into the musical and physical landscapes of Sounds and Sorcery, blending with that from external speakers which allows the audience to experience the show in groups as well as individually, providing moments of solitary respite beneath tentacles of silk and collective panic beneath erupting volcanos.

This buffet of walk around delights has a charming ingenuity to its lighting design and visual wizardry, with bouncing multi-coloured clouds overhead and orchestral instruments sticking out of every nook and cranny. Sounds and Sorcery succeeds in creating what feels like a mini Disneyland, whilst managing to avoid any use of the mouse man himself.

The variety of spectacle that the show presents is impressive, but it’s hard for a sense of trajectory to be formed between the sections. Each room succeeds in telling various stories effectively, but the stories start and end in each area, with, exactly like the original animation, very little continuity between them. This may leave audience who seek a more traditional narrative structure in a show feeling disappointed, but if appreciated for what it is Sounds and Sorcery offers an original audience experience that inspires curiosity and child-like wonder.

Overall, Sounds and Sorcery is a gallery of sensory experiences – and perhaps this is a useful way of engaging with it – offering an eclectic curation that is enjoyable for both fans and non-fans of Mickey and his pals… Disneyland with a bar, what’s not to like?