Katy Dye’s show Baby Face, showing at Summerhall in Edinburgh this summer, is an exploration of the infantilisation of women. We caught up with Katy ahead of the Fringe to find out how the show is going.

It’s going well – lots to do of course! The show was originally created a few years ago and has been through a couple of different incarnations before, my preparation for this year’s Fringe has been addressing what I find interesting in the show right now.

I am working with a producer who is originally from Stoke-on-Trent and we’ve been lucky enough to use some rehearsal spaces in Stoke to get the work up on its feet again. Over the last few weeks, I have performed at a couple of performance scratch events in Glasgow – Only Skin and Queer Theory – which have been really useful to test new ideas and try the work out in front of new audiences.

Apart from this, the preparation has been about organising lots of the practical elements of the show: discussing and sharing material with my technical team and working on the publicity for the show as a whole. 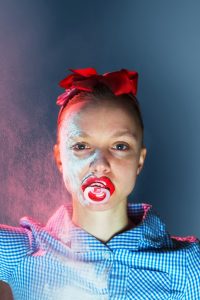 Where did the idea of making a show about the infantilisation of women come from, and how did you get the piece to where it is now?

There were a few different inspirations when I was making the piece. A couple of years ago, I read Blake Morrison’s As If which is a journalistic account of the James Bulger trial. In this book, Morrison discusses the meaning of childhood innocence in our world today. I was thinking a lot about power dynamics and moral boundaries surrounding this area.

At the same time, I was also reassessing how people treat me in relationships. I have childlike attributes to my body and I realised that I can often be infantilised without recognising that it’s happening. I started to think about the implications of this on a bigger scale, what is it that attracts us to innocence/the infantile, and what does this mean in terms of our moral codes in society?

The show has been performed in various versions since I created it in 2015 and keeps changing as my relationship to the idea and my life changes. Right now I am very interested in how to show complex psychological and emotional ideas through movement and sound. I also want to explore the pop culture references that infantilisation brings up as well as the commercialised and consumable version of infantilisation that most people might be familiar with and which, on a deeper level, could easily be seen as paedophilia. I am interested in exploring where we draw the moral boundaries between these things being acceptable or being reprehensible.

How are you finding presenting something as contradictory as society’s treatment of women?

It is a challenge: women’s treatment in society is extremely contradictory. I am approaching it from a personal perspective first and then implicating what that means for society as a whole. Infantilisation is a complex paradigm that may be present in many aspects of our lives. It is a subtle yet powerful idea. I feel there is a degree of freedom in presenting such a specific aspect of how women are treated as it opens up an approach that feels more exploratory. In the performance, I am trying to show how subtle ways of behaving and being can amount to something quite extreme, without us knowing or questioning this.

How do you want your audience to feel?

I am looking forward to VOID by Mele Broomes, The End of Eddy by Untitled Projects, European Citizen Popsong by Merieke Dermul, The Balled of the Apathetic Son and his Narcissistic Mother by 21 Common, Duckie by Le Gateau Chocolat, Its True, Its True, Its True by Breach, and Live Art Bistros 12 hour marathon of performance art at Zoo.

I think it’s meant to be about not cramming too much in? Have time to enjoy what you’re seeing, without getting stressed out by the environment of the fringe!

Baby Face is the winner of the 2018 Autopsy Award from Summerhall. The project has also been supported as one of Sir Tom Hunters 100 Disruptors scheme for people launching ambitious ideas that positively disrupt Scotland. I am working with lighting designer Michaella Fee Rossi, and Scottish based sound designer Zac Scott, and also Scottish-based producer Jack Stancliffe. Follow me @katy__dye on instagram and @katydye1 on twitter to find out more!