Produced by:
Styles and Drew, book by Lipman and Cowan

Price:
£12 plus and concessions
Reviewed by: Paul Hegarty

There has been discussion amongst performers and management about who should speak up for young performers, where can their voices be heard and their talent exposed – which is how I found myself in Stratford East earlier this week. Trinity Laban Conservatoire second year students took to the boards at Stratford East Arts theatre as they presented Betty Blue Eyes based on an Alan Bennett screenplay, A Private Function. It was a sharply observed comic film capturing divisions in a post war socially divisive Britain. Having won the war, Britain seemed to have lost the battle for stable economics, as it lurches from the strangle-hold of rationing and unemployment, which, if not exactly causing social unrest, certainly exposed squabbles and differences in the community which allowed for prejudices to come to the fore. 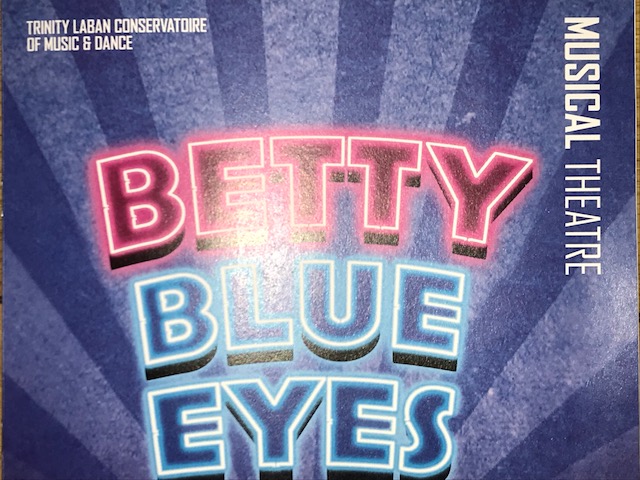 Second year Laban students sing their hearts out conveying a great sense of fun as they tried to capture this comical period piece. Under the watchful eye of a talented creative trio, Elva Makins (director) Verity Quade (Musical Director) and Omar F Okai (choreographer) scenes seamlessly moved on with good pace and focus. This comic tale has been given a new lease of life by the Syles and Drewe with their lively music and lyrics. However, it is Rob Cowen and Daniel Lipman who cleverly brought the film material to life theatrically by writing scenes with a range of bold comic characters, recognisable from any small town high street – and of course, blessed with a pig and chiropidist to lead the comic chaos.

Combined with the jaunty tunes of Styles and Drewe and a script relishing bullish northern attitudes about class and sex, this piece perfectly captured the post war prejudice of small island Britain. It celebrated the unique qualities of a very British musical with its obsession with social divisions and aspirations. This was clearly apparent in the performances of the aspiring young couple, the Chilvers – Joyce played by Emily Harper who excelled vocally, driving the piece forward along with her other half, Gilbert. Played by Brendan Mageean, the delightful put-upon Gilbert was gangly yet lithe, clumsy yet agile and comically nervous, all of which captured the traditionally comic rise of the little man who eventually finds a voice. He was an excellent foil for the men in the committee and in particular, Allardyce, played with great charm and sensitivity by Jake Lomas, who was light on his feet while oppressing his deeper feelings for the pig!

The voice of Bennett was always clear as Makins gave suitable focus to the idiosyncratic wit and charm of the piece allowing the inimitable lines of Bennett (ably adapted by Lipman and Cowan) to shine through. Such moments were neatly and humorously echoed in Omar F Okai’s slick choreography – with his comic turns of the head, a stylish flick of the wrist or an outright beep pop, he allowed the piece to shine with fun and promise. While certain deliveries were not always fully sustained and energy and enthusiasm seemed to replace intention at times,the delivery of Pig, no Pig was vocally tight, with the comic business well managed. The rendition of The Kind of Man I Am was a delightful character driven moment, as we witnessed a nobody striving to be a somebody. It was a light, sure-footed delivery that breathed confidence in to the diffident Gilbert.

The piece flagged towards the end with its numerous false endings, even though cleverly managed it really felt as if it could have been shorter. Of course this is also down to the material with reprise after reprise – clearly the writers felt you can’t have too much of a good thing, which is not always the case. However, despite these misgiving this is a sweet natured comedy that is well handled by these talented students.