Review of: As You Like It at Regent’s Park Open Air Theatre

Bizarre by nature and entertaining by vocation, this As You Like It is made funny and relevant, making the most of its gloriously open-air setting.

How do you like your Shakespeare? Joyful, country, gimmicky, and beautifully surrounded by trees? Then this production of As You Like It is the one for you.

The much-loved comedy is directed by Max Webster, who comes back at Regent’s Park after his Twelfth Nightin 2014. He gives the play a modern twist, featuring plastic coffee takeaway cups, iPhones, huge tyres, and pop-up tents – all of which fit creates a fun, but not implausible setting, preserving the true spirit of the comedy. The forest is turned into the realm of hippie-ish shepherds, living communally on music and love escapades, which is not that different from Shakespeare’s own Arcadia. Plus all the banter (often modernised with wit), cross-dressing and exhilarating jest that is integral to Shakespeare’s comedy is well-preserved.

After an unexceptional first act, with a rather weak wrestling scene (even though the ring and the set-up was pretty sick), the play really kicks off after the interval. We see a Rosalind-turned-Ganymede in full splendour (Olivia Vinall), embracing her laddish role with admirable confidence, and a triumphantly melancholic Jacques (Maureen Beattie). 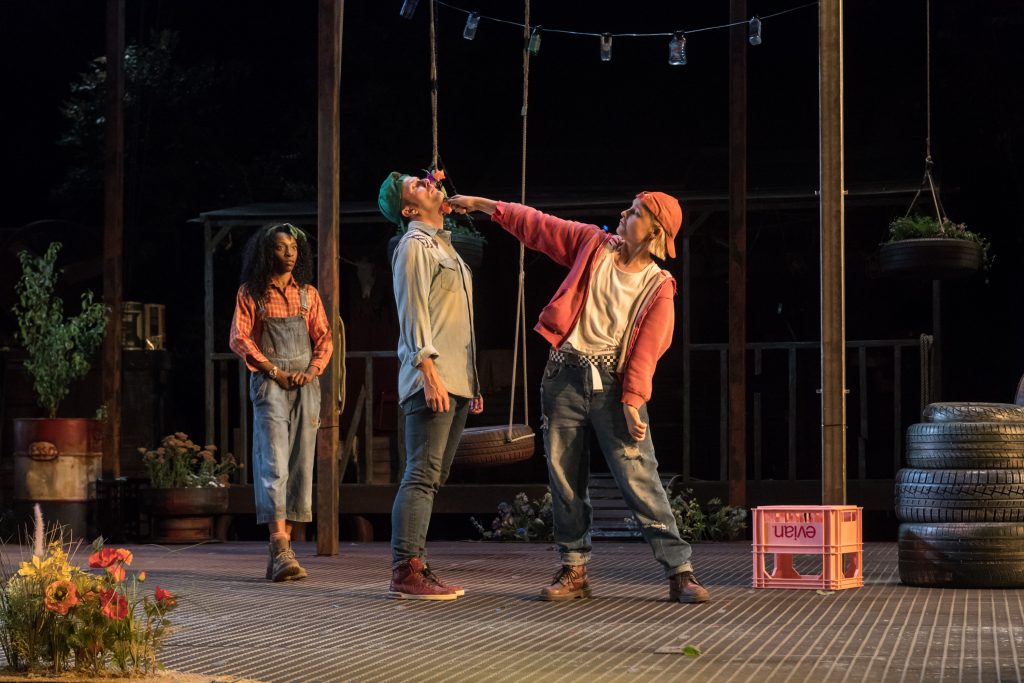 Edward Hogg, Keziah Joseph, and Olivia Vinall in As You Like It. Photograph © Jane Hobson.

Everything, including movement and music, seems to gain renewed energy in the second half (unlike England in the semi-final against Croatia). It is not infrequent to pause in awe at the progressive cohesiveness of the play, culminating in a happy ending for the characters and the audience alike.

The main strength of the production is its incredible aesthetics, which again fulfils its full potential in the second act. We get more flowers, colours, lights, making the distinction court/forest all the more clear (and pleasant). Even the cast seems more at ease with inhabiting this improved stage (though “all the world is a stage”). In addition, there’s an actual pond with (abundantly splashed) water, snow, immersive sounds, and rain (though sometimes in questionable moments).

Bizarre by nature and entertaining by vocation, this production of As You Like It funny and relevant, making the most of its gloriously open-air setting.

As You Like It runs at Regent’s Park Open Air Theatre until 28thJuly. For more info and tickets, please visit their website.