Review of: Act and Terminal 3 at the Print Room, Coronet

A double bill speaking of our (dis)place in the world.

There’s something hard-hitting, something brutal and uncomfortable about Lars Norén’s theatre. And yet one still feels better after it. In the show currently running at the Print Room Coronet, Anthony Neilson directs two short plays, both of which give us a crude portrait of life, but also prove a piece of insightful theatre.

In the first piece, Act, the set design is rather chaotic, with random objects scattered here and there on the stage, and cables starting from and leading apparently nowhere. This seems to be in line with the play as a whole, which revolves around a pressing dialogue between a doctor and a prisoner, starting in medias res and ending quite abruptly. Without a specific setting, the piece is compressed and intense, and its elusiveness means that we don’t necessarily get to the bottom of it – it remains somewhat ungraspable and out of our reach.

Perhaps the most obvious element of Act is its blatant violence, which imbues every word. The two characters’ main occupation seems to hurl subtle (or not-so-subtle) violence at one another, in a verbal exchange that reminds one of Pinter’s scripts. Memory, identity, and affections are also at stake, presented like precious commodities from the past rather than something the characters are holding securely. 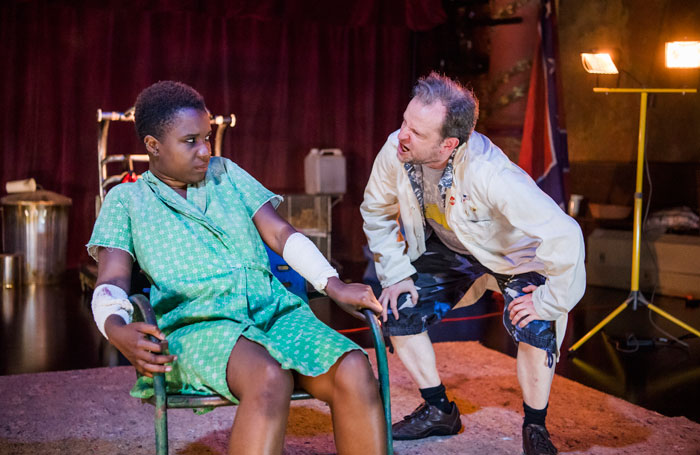 From the outset, we are asked to take sides – do we stand with the prisoner (a wonderful Temi Wilkey), who’s presented as a victim even though she must have committed some kind of awful atrocity, or do we side with the doctor (Barnaby Power), whose professional manners go well beyond what would be tolerated? The interrogation proceeds with quick, punchy lines, questions answered with questions, and re-telling of apparent truths. Regrettably, what sinks in is only what we are able to understand, given the floating, imprecise (and often frustratingly so) setting.

The real awe comes with Terminal 3, which is quite simply outstanding, from its concept down to its execution. If Act reminds one of Pinter, Terminal 3 screams ‘Beckett’ from all sides. A movable white, light screen divides the stage, as we see two couples stepping in. Two parents-to-be are awaiting the imminent birth of their child, while a more aged couple is there to identify the body of their deceased son. They are all expecting, à la Waiting for Godot. And then they are all reacting to life’s circumstances, in the most human of ways.

The piece speaks of sonder, boundaries, life and death, presence and absence. What’s the impact of a new life and the death of a son onto people’s lives? What do they bring to or take away from it? The cast, now joined by Robert Stocks and Hannah Young, offers a strong performance, staging liminality and displacement with excruciating beauty. The lighting design by Nigel Edwards creates evanescent, spectral patterns, which are absolutely in-keeping with the piece, adding further brilliance to it and making it all the more poetic and elegant. 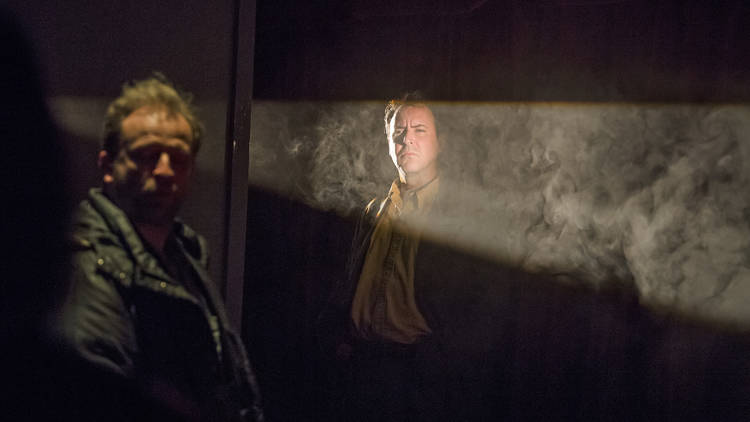 In many ways more literal and accessible than Act, Terminal 3 is moving, surreal, sleek. It is a visual and verbal representation of deep issues, but delivered with lightness and virtuosity. All in all, the two bills counterbalance each other, making the show ultimately about our (dis)place in the world.