Review of: SHOW at the Lyric Hammersmith

SHOW is “the blackly comic portrayal of a group of anarchic clowns”. A cast of 8 dancers stride energetically back and forth on the stage, wearing wonderfully bohemian clown costumes.

As I was watching SHOW, a new work by Hofesh Shechter, I had two thoughts that kept swirling around in my head. One was the endless awe for the spectacular lighting design by Richard Godin. Starting in pitch black, the performance journeys through cones of light, columns of smoke, bright-coloured backdrops, and beams of radiance which bring dancers in sight or hide them. All this gives the impression that the cast it dancing in a distant, magical space.

The second thought I had was a quote from Macbeth. “[Life] is like a poor actor who struts and worries for his hour on the stage and then is never heard from again.” (Act 5, Scene 5). Throughout the one-hour show, I couldn’t help but thinking that yes, the piece was well-conceived and awe-inspiring, but I felt there wasn’t much for me to take away from it.

SHOW is “the blackly comic portrayal of a group of anarchic clowns”. This is all very true, as we are presented with a cast of 8 dancers who stride energetically back and forth on the stage, wearing wonderfully bohemian clown costumes. Interspersed with the odd pointed foot and pirouette, the majority of movements are hunched, creepy, and ape-like, in true Shechter’s style, as we saw in his piece 2017 Grand Finale. Little hops, pauses, and shaky tambourine hands also feature prominently, cropping up again and again like variations on a theme.

On top of the already mentioned gorgeous lighting, there’s more to love about this show. Here and there we see bits and bops of coolness, like when the dancers perform tap-like movements and the score plays their tapping sounds, in spite of them wearing nothing but socks. The choreography here explores the relationship between movement and sound, which is unexpected and clever. 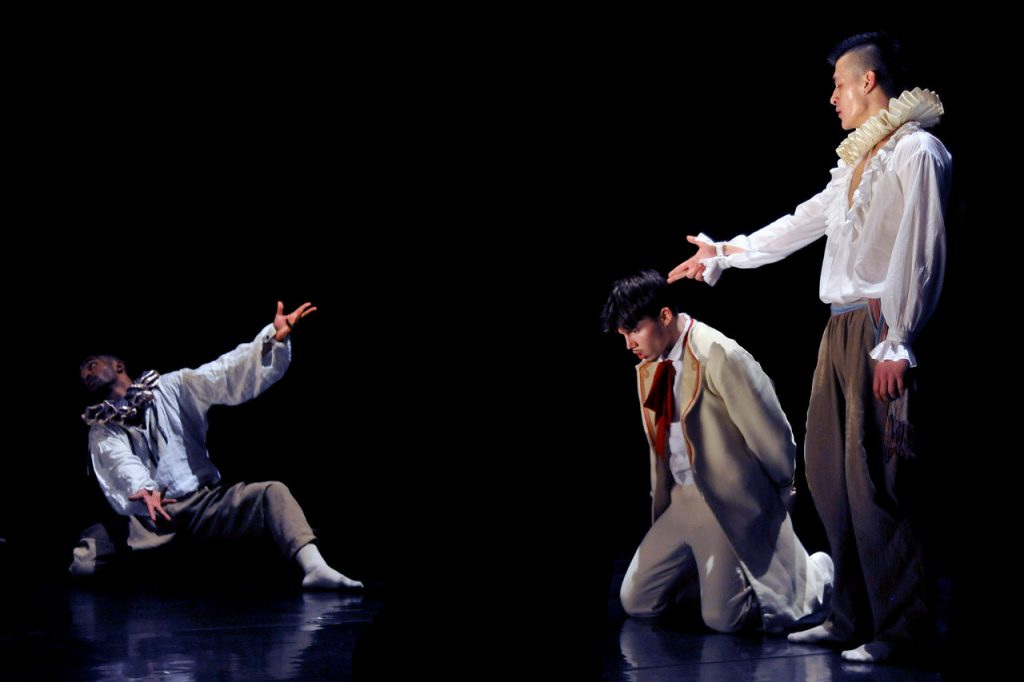 At times, though, I couldn’t help but wondering ‘Where is this all going?’. At one point, the clowns start killing each other, in a repetitive scene of mutual, unending slaughtering, and that’s all good, but what’s the point? Gratuitous violence on stage is justifiable only when there is some artistic intent behind it. I felt such intent was rather difficult to dig out, despite the extremely talented cast, amazing lights, and wide-ranging music score. Fluid, bold movements were certainly admirable, but were missing a unifying thread, a raison d’être, something for the audience to hold onto.

Luckily, the show ends the way it does, and partially redeems itself. After the curtain call, the cast remains on stage and present us with a summary of the show as a whole. Still featuring snappy lighting, the dancers recreate familiar situations in quick succession, reinterpreting with renewed vivacity what we’ve just seen. This final touch had indeed a redeeming power on the show, unlocking what during the performance felt sometimes upsetting and empty. A show that leaves it so last minute for its brilliance to shine is rather unusual, but I left the theatre with a refreshed perspective on the show, rescued by those final 7 minutes of mad dancing.

SHOW runs at the Lyric Hammersmith until 12th May.