Grotty, Izzy Tennyson’s new play showing at the Bunker Theatre, is a new lesbian drama that’s as grim as it is real. It’s being produced by Damsel Productions, the all-female team behind last year’s Damsel Develops. We caught up with Hannah Hauer-King, director of Grotty and Artistic Director of Damsel Develops, to find out how the show was going. 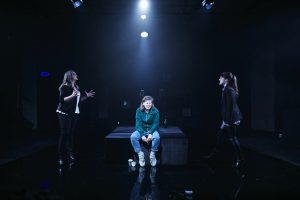 How have you found the show has changed while in the space? What have audiences been like?

It’s been amazing! The audiences we’ve had in have been brilliant, and we’ve really been reaching queer women in particular. Every night has been a female-dominated audience, and people have been reacting to the show really well. And it’s been interesting speaking to the men who’ve come in too – I’ve had a lot of conversations with people who’ve been like ‘oh, that’s what it’s like for you!’.

The Bunker season this time is very female-focused, but it’s still not particularly a queer venue.

It’s kind of a two-pronged thing. One of the reasons was that we wanted a big Damsel show at the Bunker, as an associate company – I knew that I wanted to utilise the space, and not pretend that it’s a proscenium, glittery space. I love that it’s this underground car park! Using the space had to be using the architecture, and monopolising on the venue, not hiding it. And Grotty was the one to do.

They were amazing in trusting us – we’d done Damsel Develops here in November, which was a really lovely taster for us of being in the venue and what that means – and they really just said we want you to do whatever feels salient, and whatever feels like it’s what you want to do.

For me, that’s what drew me to the Bunker: the space, and working out what I could do in that space theatrically to bring this play to life. And there was the fact that there wasn’t a controlling artistic voice, but instead them saying ‘we really want this group of female creatives to come together and put this piece on stage’. It’s a dangerous programming venture for a lot of theatres; it’s not commercial, and they were willing to buy into it.

I also just knew it was a play that needed space. It starts with a woman talking about being in a basement – and we’re there, in this basement venue. It has a wonderful feeling of being like a club during the day, so it did feel like a perfect fit.

Talk a bit more about Damsel. How’ve you got here?

We came together as a company just over 3 years ago, with our production of Dry Land, and I’d just finished my residency at Soho Theatre. They put me in touch with Izzy when she’d had a really good run of Brute up in Edinburgh, and they said that they thought we’d probably be a very good creative fit. It needed a company behind it and a director with it to bring the play to life at Soho Theatre. It was kind of like another test run for Damsel with a show at Soho Theatre, which then led to Fury.

So we did Fury, had a wonderful time, and I was excited by Izzy’s voice. I love her semi-autobiographical tone. At the time she was already writing Grotty, so it felt like a natural progression to move onto that play together.

And what’s next for the company?

We’re doing a show by Abby Zakarian, called Fabric. It’s a one-woman show about the more insidious and less obvious forms of sexual violence and ownership of women. So you know – we’re not great at comedy! Grotty is probably the closest we’ve ever got. Fabric is about a woman who’s not your expected ardent feminist, but instead, she reflects the kind of women whose real mission in life has always been to get married and have kids. So she finds her perfect man, but then on her wedding night, he forces himself on her.

It will hopefully be something that shows even the gentle, unobvious examples of men’s behaviour that become really insidious – so that the men who watch can see the subtlety, and see how they’re somehow implicated in this.

I hope that each time we do a play and we decide this is why we’re doing it, this is why it’s important, that it can bring in a new group of people.

And what about your artist development programmes – things like Damsel Develops, and Damsel goes Pint-Sized. Is there anything else like that in the pipeline?

Yeah absolutely. We loved doing both of those, and think they’re really important to do. But having said that, I think the only thing worse than not doing it is doing it badly. When we call out for those applications, we process all of them and go through all of them. We definitely want to talk to The Bunker about doing it again.

The other branch that’s exciting is through a bit of programming I do at the Dell, which is a cabaret comedy venue. Through that, we’re doing some producing of cabaret and comedy female duos. It’s been really important to me to programme female-heavy work at the space, and while doing this I thought – why not attach the Damsel name to it? So I’m doing some directing this year, and we’ve produced some others as well.

How is it directing Izzy in her own work?

It’s really hard! It’s really hard to direct semi-autobiographical work because you have to be so sensitive to what’s happening. And Izzy is, by her own admittance, not an actor – she’s a performer, and she’s a performer of her own work. It challenges me in the most wonderful way: I have to adjust my room, adjust my style, to bring to life this heightened performance of reality. There have been moments in the room of Grotty where I’ve felt genuinely thrilled, moved, and excited, because of what’s been happening. Semi-autobiographical work is dangerous, but when it’s done right it’s one of the most special experiences you can have in the theatre. Because it’s so real! And that’s always what we’re searching for in theatre. This is as close as you can get to method acting. It’s breathing life into the human experience in the most visceral way.

Grotty is on at the Bunker Theatre until this Saturday. Grab tickets here.