A couple of weeks ago, on a fairly ordinary Wednesday night, I sat in the auditorium of the Almeida waiting for Summer and Smoke to start. The lights went down, the audience’s chatter began to die, and a single figure walked out to stand behind the sole microphone on stage. I did the usual bum shuffle, prepping for the show to start, then frowned. Was it … normal, for the director to introduce the show? 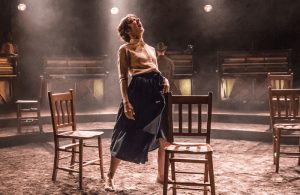 Patsy Ferran in Summer and Smoke at the Almeida

Apparently not. Rebecca Frecknell went on to welcome us to this special free performance for under 25s, and then to explain that it wouldn’t quite be the usual show we’d be seeing that night – one of the actors had been taken ill. “But we wanted to put it on for you!” she clarified, and that they just needed our patience. “One of the company will be playing a role they’ve never played before. There might be music in places where there usually wouldn’t be, and there might be no music where there usually might be. Things might happen that don’t usually happen.” She took a breath. “It’ll all be very fresh.” She thanked us again for coming, thanked her company for their willingness to keep going, and left the stage to rapturous applause.

And then, with our breath still bated, the show began.

I’ve never sat in an auditorium that felt so alive, where I felt so connected to not only the people onstage but the rest of the audience. I’ve been trying for days to put it into words, the anticipation and the togetherness that came from knowing that this show was being made right in front of us, and made right in front of us solely for the people who were in that room. It was electric, an atmosphere that was palpable. I guess there probably were people there annoyed by the wolf whistles at onstage kisses, who felt it was too uncouth when someone loudly swore at a characters death, but to me, these felt like symptoms of the liveness of the evening: without one we couldn’t have had the other.

When trying to explain to friends just how special the evening had felt, I came up stumped. The only example I could think of that came close was an experience I had at the end of 2016, watching Phyllida Lloyd’s all-female Shakespeare Trilogy at the Donmar in Kings Cross. It was a triple show day, with Julius Caesar, Henry IV, and The Tempest all back to back, and this happened halfway through Henry IV – so the audience were beginning to settle in with each other, recognise the faces sat opposite us as much as the actors we were watching. Coincidentally, this was also a performance that being under 25 had granted me free tickets to, and for this, I was in the front row and feeling very lucky about it. 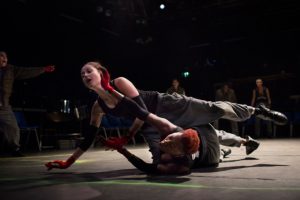 Clare Dunne and Jade Anouka in the Shakespeare Trilogy, Donmar at King’s Cross

Halfway through one of the most famous scenes in the Shakespeare canon, the Boar’s head scene – with the audience and the characters already in fits of laughter – one of the actors snapped her “sword”, which was actually a baseball bat, during a particularly dramatic flourish. Everyone paused for a second, turning to gape at the character in question, and then started to laugh again. The scene restarted, and through genuine tears of laughter, the play kept going. It might’ve been easier to bear were the bat not used throughout the rest of the scene as a pretty phallic prop, or maybe if it had snapped completely rather than had half of it still hanging on. We made it through the scene – and I say “we” intentionally, as it felt like the audience as much as the actors had to keep ourselves under control – and after a brief giggle in the transition, the show carried on. It was amazing, and the whole of the rest of the day still fizzed with the same energetic connection that the laughter had first forged.

What was it about these experiences that made them so extraordinary? Things going wrong in theatre aren’t often a cause for celebration, but these show that perhaps they should be. Problems in production – completely, I need to add, unavoidable problems – remind us as audiences just how delicate a balance is needed to make live theatre. And that’s the word that I keep coming back to here: “live”. We know, theoretically, that its “liveness” is what makes theatre a unique form of entertainment, but in a world where we are so used to the slickness of modern life, it’s easy to forget why immediacy is powerful.

It reminds us that we are necessary – that just as much as the actors do, we need to believe in the events on stage, believe that a stick is a sword and that a bloodless death is real – and there’s nothing more thrilling than being reminded that you’re needed. Is it important that these performances were free? I don’t think so – what I think is instead significant is that the audiences were young. It is so rare to be told as an under 25-year old that you are needed, and even rarer to feel like the statement is actually true as, in these cases, it was. Today I’m grateful to the Almeida and the Donmar, and to all the teams in these productions, for making theatre powerful enough to overcome problems, and for making the space to let young people in to see.