A filthy, emotional rollercoaster of ups and downs that’ll leave you wanting more.

Trainspotting is quite literally the filthiest show you will ever have the pleasure of going to. This is definitely not the type of show to get dressed up for, not unless you fancy having your favourite dressed covered in god knows what. Sit on the front row and you’re free game for the actors to torment in any way they can. I’m talking stealing drinks, climbing all over the audience, throwing soiled duvets, the contents of a toilet being splashed over you, oh and up-close (and I do mean close) grotesque nudity. If you love the film, it’s basically that x10 and the actors can touch you, and they will touch you. 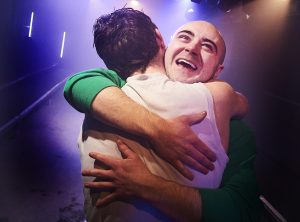 The classic Irvine Welsh story wrote drawing on his own experiences with drug abuse, being on the dole, and personal diaries feels like it was pulled straight from the book and placed on the stage. Each character is so three-dimensional that you can’t help but love each and every one of them, even when they’re not the nicest people in the bunch. And where else could you perform the play but at the Vaults Theatre, the most famous underground theatre in London situated right under Waterloo Station. The trains passing overhead made a really nice touch to the piece.

Frankie O’Connor plays a disgusting but shockingly likeable Renton, his thick Scottish accent guiding us through most of the story interlaced with grotesque humour and uncomfortably real situations. He completely unafraid to get his kit off and prance about the stage, interacting with the audience like everyone in the room is his best friend. In fact, all of the actors are completely un-afraid to push the boundaries which makes for a really gritty performance. My only criticism would be that sometimes they were talking so fast that I couldn’t understand a word they were saying under the Scottish brogue, but maybe that’s the effect they were going for.

It’s incredibly emotional, and I believe speaks to a lot of people about the state our country was in and where it is now. The lack of opportunities for the working class, the drug use epidemic, alcohol abuse, these are all central themes which ring true for a lot of people and touch the hearts of a lot more. It’s an emotional rollercoaster of ups and downs that’ll leave you wanting more. I’ll definitely be going back, and I highly suggest you go to.