Review of: The Country Wife

A creative and imaginative reworking of this Restoration classic.

Some might say a certain tone was set in court of King Charles 2nd – reflecting a backlash to puritanism with its curtailment of free speech and sexual mores – and it was the Restoration playwrights of the day that leapt at the chance to satirise and obfuscate as they developed a language of wit and innuendo. They linked language and location to behaviours with epithets and solecisms celebrating manners, which were reviewed and sneered at. Country verses town, men verses women, take your pick. This version of Wycherley’s The Country Wife, directed by Luke Fredericks and produced by Morphic Graffiti, manages to navigate the potential potholes that come with Restoration comedy with style and wit. 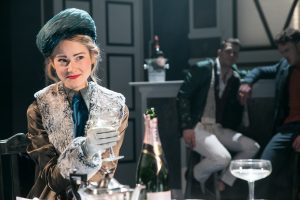 Fredericks give the play a stylish update and plonks it down in the heart of the 1920s reflecting a court of frippery and frolics, all elegantly costumed and designed by Stewart Charlesworth. But here’s the thing – gowns, hats and Charleston steps do not always enhance a piece that relies on language and a dexterous delivery. This particular language reflects social change, asserting connections between class, age and gender, dissembling ideas on marriage, love and fidelity in the same breath.

Much of the dialogue is played with brio, particularly from Siubhan Harrison as the Aliiathea, writhing from scene to scene both louche and lax in equal measures. Richard Clewes, as the older, put-upon Pinchwife manages much of the wit, wantonness, foolishness and malice that Wycherley ridicules and exposes. The challenges of the text were  also well met by Mable Clements, doubling as Dainty Fidget and Lucy – spanning the social spectrum she suggested mischief and mockery, yet wryly accepting the foolishness of man’s (and womens’s) desires. The opening scenes suggested something of the ‘Bright Young Things’ of the 20s – roaring with hedonistic obsessions of self satisfaction, Harcourt and his mate Dorilant are discovered towel-clad and six-packed in the spa.

There is much to enjoy in this production, with its stylish costumes, terrific sound track that accompanies scene changes which are smart and lithely staged by Heather Douglas. The opening sequences set a  tone of irreverence, setting up expectations with doors, drapes and dummies, all masked, cuffed and fanned, climaxing in total collapse. The company works well in mining the humour, honing the comedy to capture Wycherlye’s anti-puritan ideology with its bawdy comings and goings as it pokes fun at the seduction and excesses of us all.