Review of: The Bekkrell Effect

Strange and unwieldy circus show with some standout moments

The Bekkrell Effect is a bold and unusual piece of theatre, powered by four incredible physical performers. It does have moments of brilliance, but this piece often feels like a hot apocalyptic mess of moving set and unintelligible gibbering overlaid with a throbbing soundtrack cranked up at too high a volume to really be comfortable. Although, who knows, maybe that’s entirely the point. 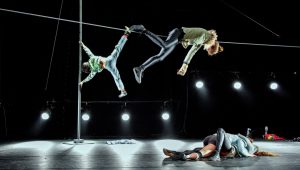 Entering the main space at the Roundhouse the stage is strewn with a deconstructed set: lights hang down on rigging almost to floor level, and an assortment of industrial looking poles, wheels, and platforms are scattered haphazardly over the stage. The performers put in mouth guards and don workman’s gloves before getting to work setting up the equipment in the pitch black. There is an atmospheric clanking as pieces are assembled, and muffled speech; however this starts to drag fairly quickly (like all the set changes in this show) until the performers are revealed stacked on top of one another up a pole at the back of the stage. This strange totem is certainly a striking image – other fantastic moments involve a complex aerial sequence performed on a hanging rope, with all four performers clambering up and causing havoc with the counterweight. Another highlight is a human-cannonball reference, when one performer clothes herself in a red puffer jacket, helmet and a blue Mohican to throw herself into the dangling centre of a rope. The performers are all clearly adept clowns, with a wonderful and very funny preparation sequence preceding this daring leap.

Spoken moments end up rather more odd; one of the performers trapped in a messy spider-web of wire, rope and poles spits out her mouth guard – and proceeds to recite Hamlet. It is a totally bizarre yet utterly compelling moment, Shakespeare’s words creating an instantaneous pool of clarity from the bedlam and mess that has gone before. Another intriguing moment involves all four performers standing intently by the dangling end of the rope, asking it sincere questions such as “how do you express your joy?” These moments feel experimental and thought provoking, with some kind of oblique logic working behind them that captures the imagination of the audience, engages us in the rhythm of the strange world created onstage.

The rest, I’m afraid, is more “sound and fury signifying nothing”. A colossal amount of time is spent changing the set into various deconstructions of itself, a decaying that is both incredibly frenetic in energy yet slow to completion. Each change is accompanied by crushingly loud “music” – grinding clanking screeching noise (to be more precise) that had me gritting my teeth and praying for my eardrums. The initial clowning is also completely infuriating: the mouth-guards muffle the speech of the performers, and they resort to growling and screeching in an increasingly unbearable cacophony of mindless gibbering. It is messy and incomprehensible, and the audience quickly become
disengaged when nothing is happening but noise or set disassembly. Several audience members made their exits long before the final moments of the show when, on a sort of space ship made of the thrown together pieces of set, the performers winched themselves up into the air. The cast are all fantastic, but The Bekkrell Effect is a strange and unwieldly vehicle for their talents.