Of all the British playwrights out there right now, James Graham is the one going for gold – three shows in the West End, a recently awarded Olivier to his name – and it’s fair to say he’s a bit of a Mastermind. And Quiz, a flashy and showy reimagining of the 2001 case of the coughing major Charles Ingram, transferring from Chichester’s Minerva Theatre, aims to solidify that status. We are introduced to the Ingrams, played by Gavin Spokes alongside Stephanie Street as his quiz-obseessed wife Diane, who, supposedly, cheated their way to the top.

Director Daniel Evans and Graham layer nostalgia on in spades, aided by the aquamarine blue of Robert Jones’ set – Keir Hardy’s Chris Tarrant delivering every catchphrase in the book (“we’re not going to give you that!” he shouts) as Ingram goes on the chase for a million. There’s even a pub quiz for posterity. Midway through the show, Graham asks his audience whether or not we think Ingram is guilty – 80% think he is. 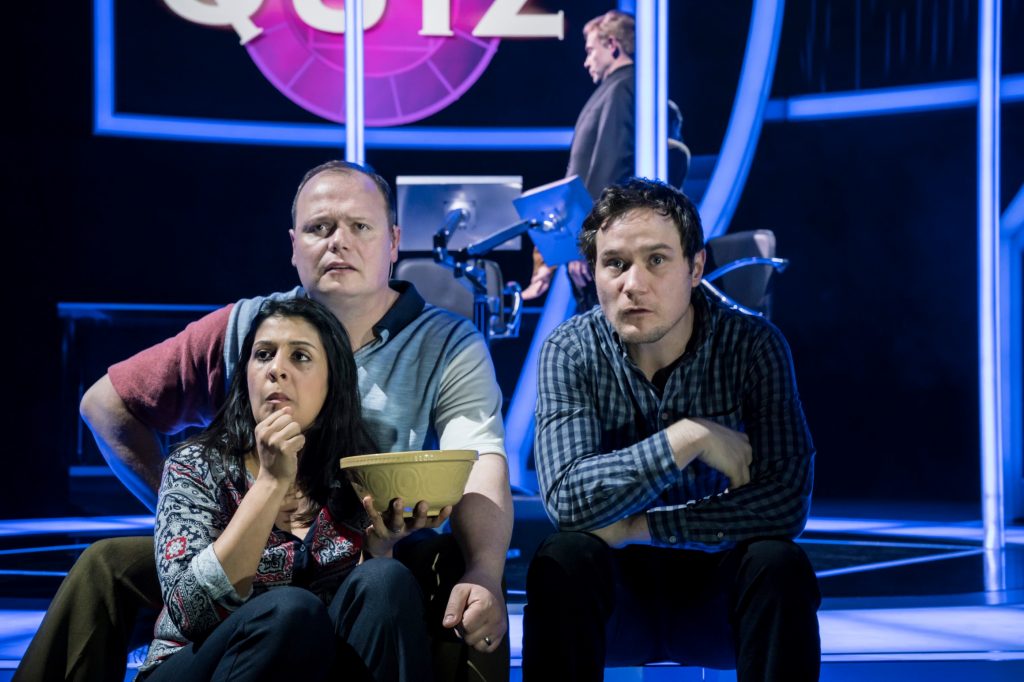 But this isn’t just a beat for beat remake of a fascinating tale – Graham layers in a family feud between Diane Ingram and her overspending brother (a man consumed by the colour of money), pointlessly wasting his earlier winnings and landing himself in debt. The Ingrams have every reason to want to cheat; to save their family, to help those in need.  And as the piece progresses, and the shady backdoor discussions of the TV studios are exposed, you get a faint whiff of an idea that it’s Ingram who’s been framed – whereas those behind the scenes, who provided the tapes, were pulling the strings. Truth, objectivity, Graham makes us doubt them at every turn.

His great skill is always to introduce these themes in a way that doesn’t make them feel like they’re only accessible to avid watchers of University Challenge, but much more populist – Spokes makes Ingram an everyman, a bumbling enthusiast. We could all be sat in that chair, perhaps ready to cheat.

Compared to the highs of Ink or Labour of Love, many may feel Quiz to be the weakest link and, structurally, emotionally, plus the final gimmick of asking audiences to re-vote at the end, there are dangerous points where it can feel about as hamfisted as a trip down the meat aisle during a performance of Supermarket Sweep. But for me, the sheer fascination that Graham has with both Mr and Mrs Ingram, their family fortunes and the more obscure information the case never discusses all make this a superb addition to the West End.