Stylish but confusing version of one of Shakespeare's less popular pieces

Cheek by Jowl’s interpretation of Shakespeare have become thing of legend – abstract interpretations in languages from around the world, they drag British audiences from the comfort of traditional froppery and force them to perceive Shakespeare anew. Pericles, Prince de Tyr by no means bucks this trend, uprooting the bizarre tale of the prince and his family and setting it in what seems like a dementia ward, the entire tale the production of old Pericles’s fevered dreams.

It’s so Cheek by Jowl it hurts. Greeted by a shiny blue set we’re treated to a pre-Shakespeare five-minute dumb-show, wife and daughter by the old man’s bed, whispered conversations with a doctor and her two assistants. We flicker backwards and forward from this hospital interior, studding the more traditional Shakespearean sections with mundane duties of changing beds, reading magazines, checking pulses. It’s a rather freeing setup, allowing the story to wriggle out of naturalistic constraints and cuts through a lot of the duller part of the tale. It’s also, however, the most confusing concept decisions I’ve experienced. 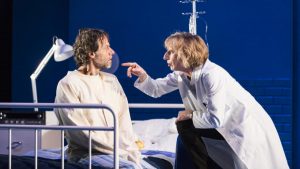 The main issue is that the story-telling just isn’t quite clear enough. The ensemble is phenomenal, switching between characters at the speed of knots, but for those less familiar with the story the currents and eddies of the plot are baffling. There no distinction between character by costume or anything easily visual, and having to constantly glance at surtitles means attention is already pretty strained – having to constantly keep up with time period, place and person is no mean feat.

However, Donnellan’s production manages to marry the simultaneous ridiculousness and genuine emotion within the piece. Thaisa’s courtship is played out as a type of bird-like mating dance, the suitors wobbling their bottoms and peeking coquettishly over their shoulders at her, while she enacts various sex positions with the chosen Pericles. Bizarrely, this stony-faced absurdity paralleled well with the more emotional moments, setting up a relationship between Thaisa and Pericles that holds to the end of the play.

It’s not Cheek by Jowl’s finest (one gets the feeling they styled rather than substanced this time around), but it’s still an interesting interpretation of one of Shakespeare’s more bizarre pieces. It’s possibly better looked at as an experiment in form rather than a full-bodied play, but if you like your Shakespeare abstract, shiny and stripped back, it’s the one for you