Review of: Mirrors at the Leicester Square Theater

“And that’s how I met my Mikey”, ShyGirl giggles coquettishly through the webcam to her huge following of 30 subscribers, before said Mikey stands her up during her livestream only minutes later.

The opening scene of Siobhan McMillan’s black comedy Mirrors is a searing indictment of social media and womanhood in the 21st century. From her boyfriend who refuses to make eye contact with her even during sex, to her hysterical excitement at receiving a new YouTube subscriber, ShyGirl’s life is tragically sad but also sadly relatable.

However, McMillan’s piece is no ordinary satire. Soon ShyGirl downs some vodka and transforms into Shivvers, a witchy and painfully vulnerable character, inspired by Snow White’s evil stepmother.

After her mirror nervously admits that she’s no longer the most beautiful woman in the universe, Shivvers sets out on a ‘pilgrimage’ to track down her nemesis, suck out her beauty and kill her dead. McMillan’s fantastically energetic performance takes us through forests, on hot air balloons and up towering castles – no mean feat for a one-woman show with minimal staging. 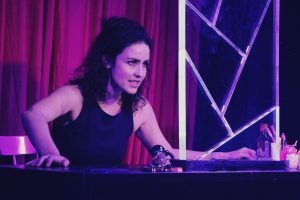 McMillan’s fairytale is an Angela Carter-esque retelling, where female beauty is never quite what it seems. Fairytale tropes are turned on their heads, and whenever the plot wanders off too much into this fantasy land McMillan brings it back to reality with a bump – usually in the form of a swear word or a moan about how she skipped breakfast.

She cleverly reminds us that the world of fairytales is not so different from our own. If the Evil Queen obsessively consults her mirror to check she’s still the fairest in all the land, so do we check  Instagram to make sure our lives are just as good as everyone else’s. And just like the princesses in this fairytale aren’t quite so picture perfect beneath the surface, so do we have to remember that the lives of our favourite vloggers and influencers are never as idyllic as they seem.

The story is wild and far-fetched but clever, witty and laugh-out-loud funny. Although towards the end it starts to meander a little, with a chaotic scene at a hummus and chips support group that was difficult to follow, for the most part the plot is easy to keep up with despite its erratic nature.

Under the direction of Gabi Maddocks, the piece is at its strongest when McMillan breaks the fourth wall, drawing attention to her own acting abilities and personality. At one points she plonks herself down in a seat on the front row and casually asks if anyone else fancies a go as she’s getting a little tired. This, along with Frank Turnbull’s playfully clever lighting design, helped McMillan utilise the space and completely fill Leicester Square Theatre’s lounge with her presence.

Issues like female competitiveness and our obsession with image are gnarly topics, difficult to do justice to, especially in a performance of just over an hour.  But this intricate and ambitious undertaking smashes expectations, and expertly picks apart 21st century society despite taking place in a world very far from our own.