Coconut is the latest production from female-focussed production company The Thelmas. The production explores writer Guleraana Mir’s own experience of interracial relationships, telling the story of Rumi, a British Pakistani woman who’s referred to as a ‘Coconut’ (brown on the outside, white on the inside). We caught up with Guleraana in advance of the show opening this week and found out how it’s shaping up. 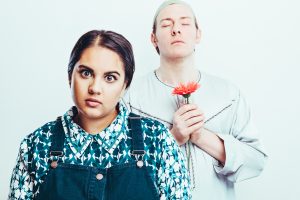 How has the process been to develop Coconut?

It’s been so much fun. When we first started thinking of Coconut as a full-length piece two of the four characters didn’t exist, and Simon’s journey was very different. But since then we’ve participated in two R&D periods, played with some actors and really highlighted the essence of Rumi’s story. The process has certainly been long but most definitely worth it. I cannot wait to see it on opening night.

What is it about the play that made you want to write it?

I think the main reason I wanted to write Coconut was that I believed that a character like Rumi deserved some stage time. I wanted to tell a story from the point of view of a British-born person of colour and to explore what it means to be British Asian. So much ‘diverse’ work on our stages is international, or problematic in the way that they’re always perpetuating stereotypes.

I wanted to go see a play about a brown woman that didn’t involve terrorism or an arranged marriage, and as there weren’t any about, I thought I might as well write one!

Has writing and working on the play changed the way you think about your own relationships?

Great question! Last year, before we officially hired Jimmy (Riani-Carter, who plays Simon) I remember him talking about the play and he called Rumi selfish, stating that she really was asking a lot from Simon in terms of converting to Islam. At first, I was very defensive, but then I realised there is a lot of truth in that and it did make take a moment to reflect on my own relationship.

The process of creating the play has also positively impacted my relationship with my parents. It’s wonderful to see them genuinely excited about the production. My mum’s booked in to see it three times!

What do you want audiences to take away from Coconut?

I’d like audiences to walk away feeling as though they are able to understand the complexity of the situation Rumi and Simon found themselves in and that there are no simple answers when you’re dealing with themes as big as cultural identity, religion and belonging. Hopefully, they will have laughed and enjoyed the humour. Most of all I want audiences to feel that this is a story anyone can enjoy, regardless of where they come from.

You can follow The Thelmas on twitter and see what we get up to when we take Coconut on tour in May and June.

Coconut opens at Ovalhouse, on from Wednesday 11th – Saturday 28th April, before embarking on a UK tour. More information is available on the Thelmas website.