Mime company Theatre Re made waves at last year’s Edinburgh Fringe Festival with their show The Nature of Forgetting, which tells the story of a man suffering from early onset dementia. The show is returning in 2018 for a UK tour, and we caught up with artistic director Guillaume Pige, who directs and stars in the show, to find out a bit more.

What was it that inspired you to make The Nature of Forgetting?

There wasn’t just one source of inspiration for the development of the piece, but it all emerged from the same question: what is eternal?

When answering this, we were very inspired by the works of Polish writer Bruno Schulz, and Polish theatre director Tadeusz Kantor, whose pieces include The Dead Class and Wielopole, Wielopole. Both shows deal with the world of childhood memories and the impossibility of returning to one’s past – which is what happens to people living with dementia. They are unable to reconstruct past memories. We were also really inspired by the atmosphere, the apparent simplicity, and the inherent theatricality of Thornton Wilder’s Our Town. 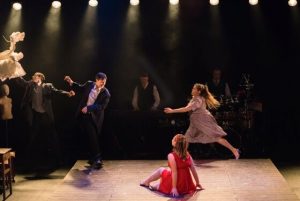 How did you find the development process? What was it like working with Professor Jeffery?

Developing this piece and collaborating with Professor Kate Jeffery was enriching on all levels. We learnt a lot about memory processes and how the brain retains information, and also about ourselves, and how we remember or forget things. Common experience tells us that we forget far more than we remember, and research confirms that the brain selects which memory traces will be retained and which will be discarded. We are therefore as much a product of our forgetting as of our memories.

It was incredibly exciting to be able to collaborate with someone coming from almost ‘another’ world, where the approaches and the ways of working can sometimes be radically different. Surprisingly though, we found that scientists and artists have a lot in common!

Do you think the show has changed since you first performed it?

In appearance it hasn’t: we still have four school desks, clothes racks, tons of props, a stage on stage, and a bike – but I think we would all agree that the feel of it has. The show has changed in the sense that it has grown and evolved with us. Part of me thinks that this sort of work needs to be constantly re-invented and re-discovered in order to stay alive.

It’s been a long process and you’ve been with the show for a while – how has it changed you as an artist or a person?

In the show we tell the story of Tom; a middle-aged father living with early onset dementia, being cared for by his daughter Sophie. Even though the piece is more about the fragility of life than solely dementia, we spent 16 months working with people living with different forms of dementia and their carers. It was an extraordinary human experience, and put my own life into perspective, giving me the chance to realise what is important and should be cherished.

I think that what makes our piece special is all the people who participated in its making. As I have just mentioned, the show was informed by workshops and interviews conducted with people living with dementia and their carers throughout our development process. Our aim was not to collect personal stories but to explore the special bond that exists between memory and music and to create links between the science and the real human experience. All of these encounters at different stages throughout the development process have really given the work its own soul.

The Nature of Forgetting is on at the Shoreditch Town Hall from 24th-28th April and then tours the UK. For more information see the Theatre Re website.