An Easter Treat that doesn't fully satisfy its audience's taste for spectacle and invention.

Giant Jam Sandwich is, unsurprisingly, the tale of a quintessential British village that fights back against the invasion of four million wasps by creating (you’ve guessed it) a giant jam sandwich. Adapted from a children’s book from the 1970s, this adaptation from New Perspectives expands the story by adding pun-making helicopter pilots, a broken-home backstory for Bap the Baker, and voices for its pleasure-seeking wasps.

The spectacular possibilities of the story are in places given the full rein of theatrical invention – with a billowing mound of dough, giant slices of bread and tiny flying helicopters provoking appreciative coo-ing from the young audience. The participatory sequences – including a bread-making, bum-slapping dance – prove a hit, and our sense of scale is played with pleasingly.

The cast throw themselves with admirable energy into this interactive and musical production. Particularly excellent is Paul Critoph as the likeable hero Bap, whose engagement with his young audience is consistently strong as he brings some finely-performed physical clowning to his roles. Elsewhere, however, the energy suffers a matinee slump – with some of the more sardonic characters and low-key humour lost in the cavernous Pleasance space. 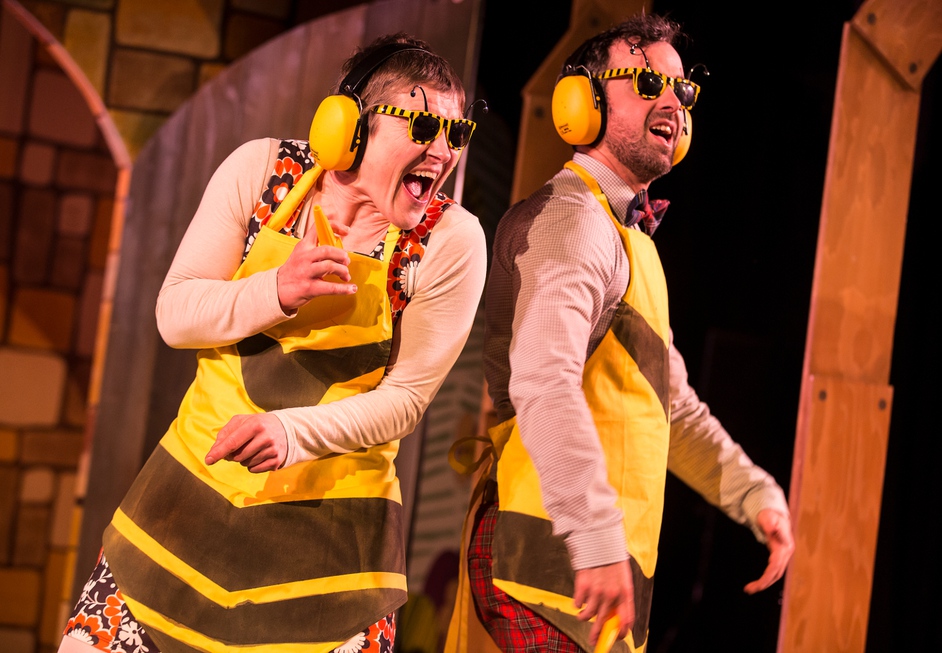 Elsewhere, the efforts to update the story for the 21st Century somehow only make it feel more dated. In this day and age, there is something distinctly odd about cheering the heroics of a middle England village valiantly fighting off invading outsiders – here, given voice, human personalities and not-entirely malicious motivations. It might seem fatuous to draw comparisons between the plot of this production and anti-immigrant isolationism, but it is a comparison that New Perspectives invites. Left with Mayor Muddlenut’s troubling final observation that “Here in Itching Down, we’re full!” one cannot help but wish more had been done with such a richly contemporary setup.

Despite the warmth in the show’s message celebrating community cooperation, sometimes this production can feel half-hearted. No one part of it quite feels filling enough – the adaptation and staging both feel they could have gone further. Whilst the sandwich itself is spectacular, and I enjoyed Farmer Seed’s balloon-buoyant tractor, the reliance on intermittent sound to create the effect of four-million wasps left the auditorium feeling rather empty. I was not alone amongst the mostly preschool audience in craning my neck to the back of the auditorium every time we were threatened by wasp intervention, hoping to be blown away. I can’t help but feel I have been spoilt by the sheer range of witty, inventive and intelligent children’s theatre on offer elsewhere today – in comparison, this giant jam sandwich doesn’t quite fill the space.

Giant Jam Sandwich performs at the Pleasance till the 8th of April.