The much-loved Pleasance London has undergone an exciting refurbishment and opens its third theatre space, the 80-seat ‘Downstairs’. The Pleasance in Islington has been an integral part of London’s Off-West End theatre community for over two decades; an important part of London’s theatre scene, Pleasance remains a home for great new theatre and comedy. The recent appointment of Head of Theatre, Nic Connaughton, also marks a fresh new direction for the theatre programme as Pleasance further develop and present outstanding new work.

The diverse programme in both London and Edinburgh brings the spirit of the Fringe to audiences year-round. Pleasance London’s new thrust theatre space is launched with an exciting season that welcomes four new productions including a transfer of the critically acclaimed Bismillah! (an ISIS tragicomedy) by Matthew Greenhough and world premiere of Bingo by award-winning writer Alan Flanagan. 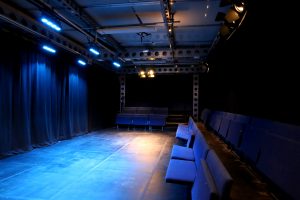 These are joined by The Year of The Rooster Monk, Les Foules’ hypnotic and spooky meditation on race, gentrification and 90s movie Ghost, which is supported via a new partnership with London and Sheffield based Theatre Deli, starring Daytime Emmy-winning actor Giselle Gant. This season also includes Tom Ratcliffe’s (Circa, Circa Theater de Meervaart, Amsterdam and The Vaults) new play Gifted.

Audiences were first welcomed to Pleasance Downstairs – then called ‘Beside’ – during the 2017 Edinburgh Festival Fringe, however this season marks the venue’s first appearance in London. A collaboration between Triple E and Pleasance, Downstairs is the first temporary theatre built from ModTruss and will reside in London for 10 months every year, before returning to the Pleasance Courtyard for the Festival Fringe each August. This uniquely versatile space allows for rehearsals during the day and performance in the evening.

Nic Connaughton, Head of Theatre at Pleasance, comments, This is an exciting time for the Pleasance in Islington with the launch of our new 80-seat thrust venue – Downstairs. This new space will complement our existing StageSpace and Main House, each with a unique and distinctive flavour. Stage Space will remain the home of adventurous companies and artists, taking risks with new ideas and stories. Downstairs will focus on longer-run text-based theatre, presenting both transfers and premieres from the most exciting companies and playwrights. Our Main House will continue to welcome the best in UK and International theatre, with a specific focus on musicals, unique takes on modern classics, high quality touring productions and presenting the best work being made by companies outside of London. I am so proud to announce this stacked programme of work; collectively these four shows are a statement of intent for Pleasance Islington and will establish our Downstairs space at the forefront of
excellent New Writing.

In addition to the refurbishment and our new theatre space the Pleasance also launches a new youth programme for local Islington residents. As a branch of the Young Pleasance company, Young Pleasance London is a new year-round youth theatre for young people aged 16-25. With a mission to create a diverse, inclusive, innovative and socially responsible youth theatre, focusing on verbatim theatre and new writing, this company will develop the voices of young artists and give voices to those in the community who are seldom heard.