Matt Tedford. This show may be all about Margaret Thatcher, but Tedford is the genius behind it – taking the iconic, feared, legend that is Maggie T and transforms her into a glamorous, diva-rous superstar. Despite being flanked by two highly energetic men in short shorts (Nico Lennon and Ed Yelland), who display equally hilarious caricatures of a number of well-known political figures, Tedford is the only one we have eyes for.

The atmosphere is buzzing (as only the audience for a Margaret Thatcher drag show can be), needing little encouragement at an announcement of “she won’t come out unless you sing”. We raucously join in to a chorus of “In The Navy” and Dolly Parton’s “ 9 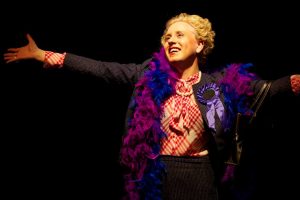 to 5”, flashing spotlights dazzling the stage and audience, and there she is. Sensible black heels, infamous blue suit, string of pearls small, small patent black handbag, and (of course) crowned with with the quintessential Thatcher wig. Dramatically, the wig decided to take on a life on its own this particular night, deciding it’s probably had enough of political drag acts and retiring to a place where elasticated headbands are less neccessary. Tedford handles it smoothly, joking “we’ve been doing this show for five years and this is the night it decides to break” with only a light bit of corpsing carrying his Thatcher persona through the crisis.

The set is simple, the main feature being a hanging glitzy “Maggie” sign, covered in glitter and drawn in the kind of bubble writing doodled across books in year 9. The show doesn’t need anything else, the larger than life characters more than enough to keep the audience entertained – although a certain talking Winston Churchill portrait deserves a special mention for being simple, yet effective and, hilarious to the point of tears.

It would be remiss of me to write about this show and not mention its key theme, Section 28, the local government act which stopped the promotion of homosexuality, mainly in schools. In Maggie Thatcher Queen of Soho Thatcher she sees the error of her ways and stops the bill (after becoming a cabaret superstar of course). Sadly in the real world, outside of the glittery bubble in the tunnels under Waterloo, this was not the case and it wasn’t repealed until 2003. However, there is something wonderful seeing the team give a huge, glittering, scantily-clad middle finger to the infamous British icon – taking the piss using a theatrical form she surely would have hated. Many love her, even more hate her, but whatever your opinion on the baroness might be, you cannot dispute that her name will live on.