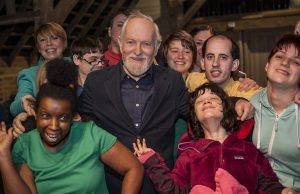 Twenty years ago, Sir Richard Stilgoe (the incredibly successful lyricist of, amongst others, Starlight Express and The Phantom of the Opera) set up his second charity, the Orpheus Centre. This organisation, a specialist college for young disabled adults to help them get involved in the performing arts, has since changed thousands of lives, with the majority of students who have taken part in their residencies going on to live independently. In this, their 20th year, Sir Richard and the students of the Orpheus Centre will be taking to the stage at The Other Palace with Orpheus: The Mythical, alongside alumni, recent graduates of Arts Ed, and a number of special guests.

“Whenever Orpheus sang,” Sir Richard tells me, “the world stopped and listened.” He seems to be a perfect patron for the charity, and a perfect topic for this celebratory production (as well as popular – Orpheus). “It makes a great story for a musical – there’s lots going on, there’s a dragon, a three-headed dog, and there’s the Argonauts going off to find the golden fleece. It’s a cracking tale.”

This is the show’s second iteration, after a performance in 2010 at the Yvonne Arnaud in Guildford which featured students from the Guildford School of Acting. Sir Richard is now perhaps an expert in making this work. “I work with students at the Orpheus centre, so that they’re confident and know their stuff. And also so they can frighten the pants off the ones from Arts Ed by being terrific.”

With such an eclectic company, I ask, how does the rehearsal room work?

“Almost everything we do is mixing up disabled and non-disabled people. I’m not that keen on ‘disabled’ theatre, where it’s all one group. I think the interesting thing is when you bring two groups together, and get them to share stories with each other.”

Orpheus – The Mythical is on at The Other Palace from 23rd to 31st March. Tickets start at £15 and are available here.