Review of: Electra at the Bunker

Done badly, Greek myths have the potential to be awfully dreary things. Generally there are male heroes that kill people, female heroines that sit around looking beautiful and lots of gods that mill around smiting and cursing people for fun when they get bored. DumbWise’s production of Electra, however, attempts to circumvent all of this with some well-place live music and a modernized script with a wonderful amount of swearwords, managing to inject some relevance into what can be a rather tired world. 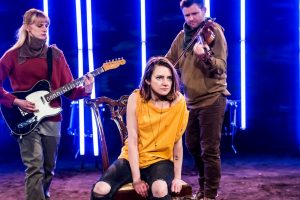 John Ward’s production is generally taught and thrilling, with the main success is keeping the text fresh and interesting, helped by a veritable cornucopia of talent. Lydia Larson is wonderfully crass and sneering as Electra herself, pacing around the stage with an animalistic lope, all eyebrows, teeth and spit. It’s a show-stealing performance – every idea in the text is punctuated by a ripple of distaste, a beat of the head, a snarl. Her physicality is taught and electric, and she makes many of the huge themes of the piece (killing one’s husband, killing one’s stepfather) that can seem alien to a middle-class audience chunk-sized and understandable. She’s supported by a gloriously naïve Dario Coates as Orestes, Sian Martin as Clytemnestra, a oozingly political Matt Brewer as Aegisthus and Dean Graham, Megan Leigh Mason and Samuel Martin as multi-rolling Chorus.

However, the structure and form of the play sadly don’t quite live up to the strengths of the cast. The soundtrack is wonderful and haunting, but it never seems to fully establish it’s place in the world, hanging around in the background and ducking it’s head. There is some excellent foley and musical direction by David Hewson, but one yearns for these sections to be included more in the storytelling of the piece. Where’s the chaos, instruments running wild – this feels like an attempt at gig-theatre but without the bold, unapologetic brashness that’s so reminiscent of the genre.

There are some structural question marks – big, blocky scenes tend to make the first act drag, and some could easily be cut altogether. The second act, however, achieves a litheness that was markedly absent from the first, rising to a glorious crescendo upon Larson’s final speech – we’re challenged to react, to do something, to stop waiting until we ourselves are affected by political changes and react to other’s pain as well. These last five minutes reveal a glimpse of the promise of the piece, and mark Larson as one to watch in the future.