Review of: Double Bill by Candoco at Sadler's Wells

The show went beyond anything I could imagine, proving fruitfully (if shockingly) uncomfortable, and inspiring new ways to think about dance and disability.

When seeing a performance by a company like Candoco, it’s terribly tempting to think ‘I know exactly the kind of show I’m going to see’. Naively, that’s what I thought, and I had to think again. Double Bill went beyond anything I could imagine, proving fruitfully (if shockingly) uncomfortable, and inspiring new ways to think about dance and disability.

The mission of the company is to promote an inclusive approach to dance, exploring and going beyond the limits of what dance can be, and who can dance. During the pre-show reception, Artistic Co-Directors Charlotte Darbyshire and Ben Wright made clear that these are busy and exciting times for Candoco, with an agenda packed with ongoing and future international projects. It’s great to see disability get the attention it deserves… until such attention is not needed anymore (paraphrasing from the show itself).

Full of anticipation, I took my seat and watched the first piece of the show, Face In, by acclaimed choreographer Yasmeen Godder. The piece was, indeed, in-your-face. Aggressively, violently, ferociously so. Dancers running hysterically on stage, tongues sticking out, faces grimacing menacingly, clothes and limbs being bitten and tossed around (and kissed?). This felt very much a brutalist performance, with obscenity and ugliness thrown at us. 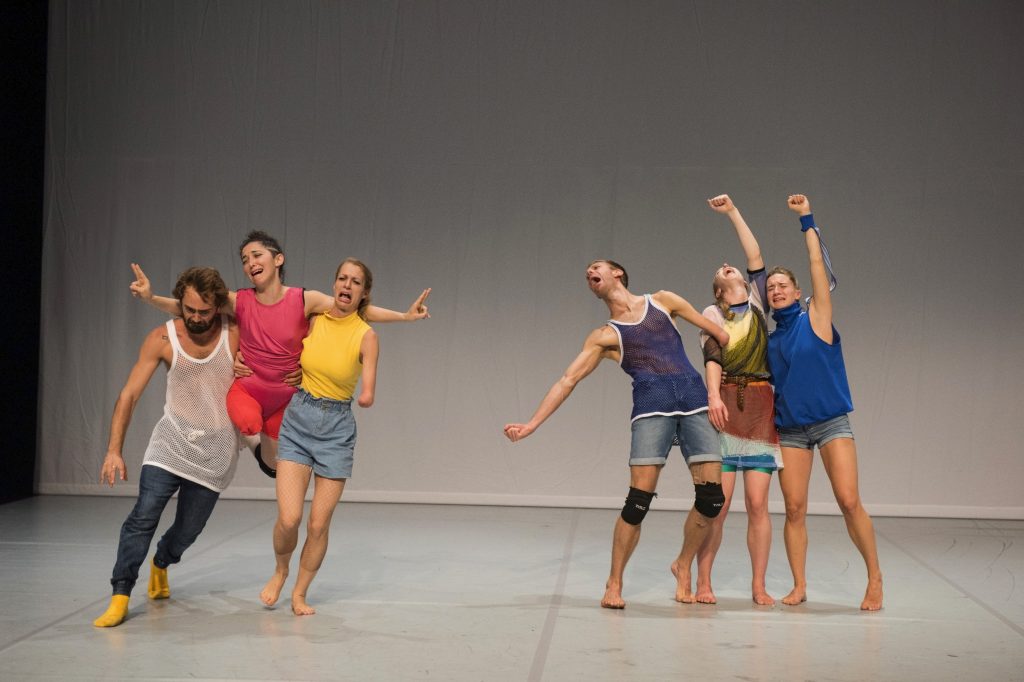 Rather obscure at times, the discordant nature of Face In challenged the shared assumption that dance should be beautiful and pleasant to watch. That said, I was almost grateful when the whole company performed in unison, with the same movements, but each in their own way, which proved that diversity does lead to richness. It was moments like this, with a more positive take on diversity, that managed to hook the audience, as opposed to alienating them, and ultimately communicate the real ethos of the company.

Let’s Talk About Dis, on the other hand, was much more accessible and less cryptic. Featuring gestures, words, sign language, singing and movement, the moments of actual dance were (sadly) rather limited. The spoken bits were clever, relevant, and incredibly funny – especially the story told in French-English-sign language, with abundant content getting lost in translation. However, one wonders whether it might have been possible to convey the same message while allowing more space for the medium of dance itself. The overall impression was that the company engaged in a great deal of activities, but dance was not the most prominent of them.

The two pieces undoubtedly complemented each other, creating an unconventional cocktail of political, artistic, and social messages. Ultimately, the strength of Double Bill resides precisely in being different, in defying our expectations and making sure we don’t remain indifferent.

Double Bill by Candoco Dance Company performed at Sadler’s Wells on Friday 9th and Saturday 10th March. To find out more about the work of the company and their upcoming shows, visit their website.