Infectious and invigorating potrayal of the effects of climate change

Chickenshed already has a pretty formidable reputation. Having grown from a small group of children in a back garden shed to the huge, wonderful, sprawling beast that it is today, it’s a fantastic example of the changes theatre can inspire in society and people’s lives. It’s no wonder, then, that Don’t Stop Thinking About Tomorrow is the infectious battle cry that it is.

There’s something deeply wonderful about seeing 200 children march onstage and ask the audience of grown-ups what the hell we’re doing to the world they’re going to have to live in. The piece is concerned with the human face of climate change, not with the numbers and statistics but with the actual people and animals that live behind the science. 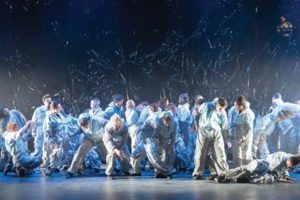 It’s a battle cry from the younger generation. Physical theatre bleeds into spoken word bleeds into song, the vast numbers of bodies onstage representing everything from a drought in Kenya to plastic choking our oceans. Water bottles become fish, darting in and out of sinewy weeds created with strips of plastic bags, jellyfish bob up and down as more and more plastic slowly colonizes the underwater world.

Water shortages and water wars play out in front of our eyes, rationing meaning a choice having to be made between washing, cooking drinking in a future that isn’t actually that far away. The company’s young cast is brilliant, with some stunning dance and vocal skills on show – each individual member putting their heart and soul into the story, shaking us out of our perceived apathy. It’s challenging, chaotic and has an urgency rarely seen onstage.

Chickenshed is a fantastic example of how there really isn’t that much that divides us. Elder children help younger, children take turns manouevering those in mobility vehicles, lines and movement solos are divide up equally. One is forced to stop and wonder how, if everyone else in the world came together to fight climate change in the joyous, invigorating way this group of children does, we’d have a much better chance of producing a future we ourselves would want to live in. Don’t Stop Thinking About Tomorrow has an infectious message, and one that cries out to be not only heard, but acted upon.