Dolly Parton, Dolly the sheep and the bits left behind

Apparently their ‘mainstream crossover hit’ (according to creators Sh!t Theatre), DollyWould is a gloriously anarchic, completely bizarre mashup tribute to Dolly Parton, Dolly the cloned sheep and a in-depth theatrical analysis of the nature of performance. 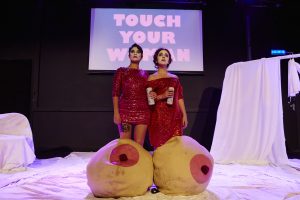 Deconstructing our idea of sexuality, confidence and legacy through the intensely over-sexualized image of Dolly Parton, Rebecca Biscuit and Louise Mothersole have a distinct talent for creating links between what might seem like complete thematic nonentities. Body farms lead to skin decay rates lead to tattoos lead to wigs lead to sheep and on and on and on – it’s not exactly directionless, it just takes you through so many twists and turns, sharp lefts, roundabouts and trips down country lanes that you just have to sit back and enjoy the ride rather than worrying too much about the destination itself.

However, Mothersole and Biscuit certainly seem qualified guides for a trip this routinely bizarre. Two large boob costumes make quite an impression, the duo layering fuzzy blond wigs and strapping swimming goggles with large, painted blue eyes to their foreheads with such severity one is never quite sure whether one is allowed to laugh or not. It’s a fan show with a deeply cynical edge, taking the piss out of performers, audience and Dollies alike. The more light-hearted comedic sections provide a wonderful balance to some gratingly unpleasant sequences, such as audio clips of interviews where Dolly Parton is regularly asked about her beauty, her breasts and her weight with a ‘oh I’m so naughty’ tone in the voice of the interviewers. It sets the sexism she faces against her almost aggressive branding strategy – owning the discrimination and finding a way of turning it into hard cash.

It’s a non-conformist, cross-cultural mishmash about how one’s identity is caught up in the performance of that identity, and the traces that are left behind – in one Dolly’s case, she’s stuffed and stuck in a rotating glass cage, in the other a portrait of her face adorns Mothersole’s and Biscuit’s legs. ‘Real’ and ‘fake’ quickly turn grey and disappear in DollyWould’s world, and instead leave a morbid fascination in the remnants that are left behind.