Review of: Buggy Baby at the Yard Theatre

Price:
From £12
Reviewed by: Alex Wood

An elusive, powerful production comes to the Yard courtesy of Josh Azouz

There’s a nastiness simmering beneath Josh Azouz’s Buggy Baby, which opens at east London’s Yard this week. The piece, directed by Ned Bennett (An Octoroon) is the creation of someone who sees a garish cruelty to life, especially the lives of those who fall through the cracks, marooned in a world that seems unwilling to care for them.

Despite its title, Azouz’s play is far from infantile. Following a trio of immigrants nestled in a small London flat, we are given a brief glimpse into the life of those thrown about by turbulence, desperate to find stability or, if that’s not possible, lose themselves in their instability. It’s brutishly comedic, sometimes unwatchably horrible, and, for the most part, unforgiving. In their abode life never truly seems real – the trees are composed of giant balloons, the baby can talk. 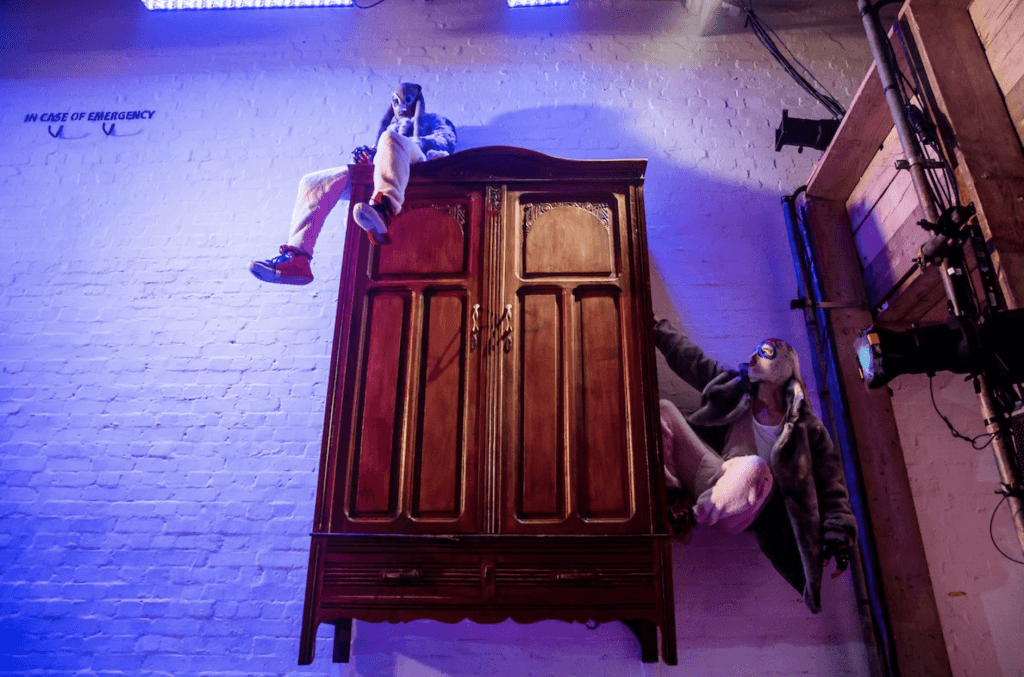 It’s a piece full of paradox. The plush pink carpet of Max Johns’ goes from cutesy to sickly considering the incessant drug use and violence played out upon it. The use of narcotics, indeed, seems to be the only regular part of the daily routine. Considering Johns’ set is without walls, it’s full of characters constantly hemmed in by their memories, their borders and circumstances. Baby Aya’s desperate pleas (the baby often being the sagest one in the room) to just leave always fall on deaf ears – escape is impossible. Azouz’s writing, though taking a little while to get itself fully mobile, bounces from painful clarity out into abstraction, each time becoming more absorbing, more draining.

Performance wise, it’s a scene-stealer from Jasmine Jones as young baby Aya. With deft physicality, the actor creates one of the most believable depictions of a young child, going so far as to eat mud and nail cursory hand movements. It’s a controlled reflection of a body that hasn’t fully learned how to control itself yet.

Bennett knows how to lay it on thick when necessary but, more importantly, manages to pull back the bells and whistles to let his characters play out their scenes with little distraction. For all the berserk, baseball bat-wielding rabbit interludes, summoned by a blaring fog horn and intense strobe lights, there are also soft, quiet and tender moments, especially between mother Nur (Hoda Bentaher) and baby Aya. In the end, it turns the piece into a bold dichotomy between the noise of jumpscares and strobes, and a more sedate basic wash. It works, for the most part, but in only having these two states, overwrought and underwrought, the grey area in between seems sometimes untapped. 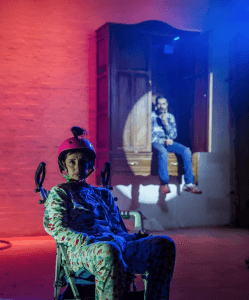 For a less capable director this would be more of a fault, but Bennett’s off-the-wall ingenuity (quite literally off the wall in the case of an antique wardrobe bolted two feet off the ground to the back of the stage) gives the show an unsettling novelty – nerf guns, bubble makers, giant helium balloons all swaddle the violent themes of the show in a toothless sense of harmlessness. In doing so, Azouz and Bennett parody our own perceptions of immigrant lives – we convince ourselves that the roughness disappears once they reach our shores, that the safety of a London abode means danger is gone.

This isn’t a pleasant night at the theatre. It isn’t the sort of show that you’ll have a jolly chat about over a pint afterwards. It’s elusive, and tough going, and always teeters on the brink of descending into something formless. But Azouz and Bennett’s adept handling of the subject, of its complete abstraction, and some superb acting from a cast who inhabit this concept completely, transform the 90-minute piece into a garish, creeping experience that leaves you brooding over its content well after the final blackout.

Buggy Baby made my head hurt; we need more shows doing that on our stages right now.