Review of: Beginners at the Unicorn Theatre

Much has been written about Tim Crouch’s work, and much is still, surely, to be said – his vision as a writer and a director has allowed work to interrogate theatricality, form and assumption. Pieces like The Author, Adler and Gibb or An Oak Tree have always had the capacity to shock and alter our perspective on the performance space. As he said in an interview recently: “In my work I’m always trying to make one thing represent something else.”

But what is often overlooked is how fantastic his work has been for children and younger audiences. His I, Shakespeare collection, firmly lodged on my bookshelf, is a young person’s guidebook to interrogating existing stories and narratives. Adapting existing Shakespeare characters and giving new monologues from the perspective of peripheral figures, it reminds us that the most vital part of any theatrical experience is the audience’s ability to first comprehend and then question what is occurring onstage. 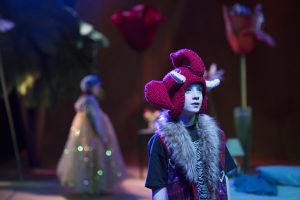 Prologues aside, Beginners is a hearty reminder of this skill, currently running at the Unicorn Theatre. Set in a remote country home, it follows four young kids, subjected, in their opinion, to the worst holiday ever. It’s raining. The parents are off at the pub getting drunk. There’s no one for them to perform their play in front of. It’s a charming, low key start to a piece that eventually bursts into colour, with no small help from some magnificent set design and a round of Radiohead karaoke. Chloe Lamford and Camilla Clarke deserve a huge amount of credit for creating a rich wonderland (some production photos may spoil the surprise) – this is a show knows exactly when it needs to dazzle.

With the kids, who early on pretend to be adultlike (one is a doctor, another a mother), being played simultaneously by pre-teens and professional actors, Crouch once again provides a chance to make sure whatever he’s placing on stage isn’t always what the story is trying to show. The kids are ready for all the necessary kidlike activities – pillow fights and dog hugs, but they also resort to phatic language, imitating their parents and mimicking parental language (discussing the state of the traffic and suggested travel routes, as well as demanding the WiFi password).  It ends up as a tightly wrought meditation on the nature of age, the idea of loss, and acceptance, and the construction of a sense of harmony.

But more importantly, it’s a show that works for audiences of all ages. The Unicorn was packed on press night, and the laughs came from every generation – the farcical behaviour of the dog Sandy (Amalia Vitale) stealing a number of scenes, with the candid canine nailing deadpan comedy time again.

The swapping between the age of the performers playing each character may feel eerily like Howl’s Moving Castle, but by drawing four incredibly relatable, funny, and sometimes sad young people, it becomes more like Tim’s Moving Tale. A must see.